Jurassic World Evolution 2, the sequel to the 2018 prehistoric park sim, is making the rounds. While not everything is perfect, it has thus far engrossed players with its deeper gameplay and the enduring novelty of bringing dinosaurs back to life for tourists' entertainment.

Of course, that ludicrous premise spawned a prolific franchise years ago. Five entries have been released to worldwide commercial success, and a sixth one is well on the way. As is the case with any such series, the creators have racked up a ton of iconic imagery and memorable lines which fans know like the back of their hands. Jurassic World Evolution 2 alludes to many of those through Easter Eggs. Some of these are buried deep, but it won't take devotees long to dig them up.

This marine carnivore's name sounds somewhat different than most. That's because it's co-opted from a person's name. Specifically, it was dubbed in honor of David Attenborough, the famed nature documentarian. However, the animal carries even further significance to this franchise.

David Attenborough is the brother of Richard Attenborough, the actor/director who played Jurassic Park creator John Hammond in the films. Yes, this underwater reptile shares a name with two prominent figures, both of whom are associated with filmic achievement and the animal kingdom. This particular animal probably doesn't understand the importance, but fans assuredly do.

The Cearadactylus might seem like just another pterosaur at first, but it actually comes directly from the Michael Crichton novel. In introducing his park, Hammond mentions having several specimens ready to go. The Cearadactylus is among these, but it's curiously absent in the movie. Book details get lost in adaptation all the time, and Jurassic Park cut quite a few things. Better late than never, though.

This flying reptile is now back in the park for players to admire. The catch is that you can't access it when using the original Jurassic Park aesthetic. It's nonsensical and ironic, but a restricted presence is better than no presence at all. Fans and dinosaur experts will get the inclusion regardless.

6 - In The Beginning, There Was The Velociraptor 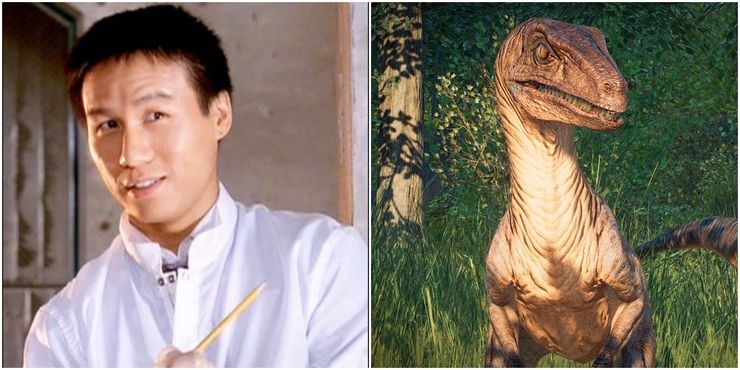 This might simply be a coincidence, but it's worth mentioning nonetheless. An offhand bit of narration reveals that the Velociraptor was the first dinosaur that Hammond and Dr. Wu engineered.

Michael Crichton's seminal novel says the same thing. It even involves the same two characters. Whether or not this was an intentional callback is anyone's guess. Then again, the raptor was the first dinosaur that audiences saw in the Jurassic Park movie, so perhaps this line carries more weight than meets the eye.

Many things changed between Jurassic Park and Jurassic World, but this little guy stuck around. In the first film, Hammond plays a video presentation to explain the concept of cloning to all the folks back home. Hosting this segment is a talking strand of DNA aptly named, "Mr. DNA." He fulfills the same function in the newer park, as he briefly appears as an instructional hologram for guests in the fourth film.

Jurassic World Evolution 2 keeps that trend going. As the opening cutscenes get fans up to speed, Mr. DNA zips across the screen. He helped introduce the premise in the original classic; it makes sense that he does the same here. 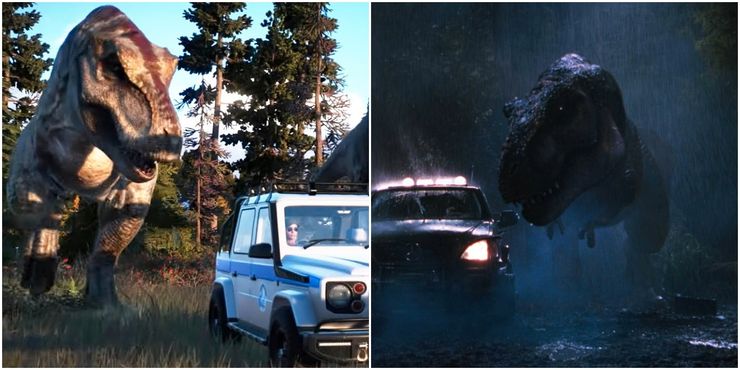 The game's marketing showcased this visual gem. Leading up to release, Frontier put out field guide videos for their available creatures. They're basically narration played over alpha game footage. The Tyrannosaurus rex entry might look familiar, though.

One of the clips features a pair of them stalking a jeep. They ominously come up on either side of it before the scene ends. This is exactly the same way they ambushed Eddie's vehicle in The Lost World; it's even shot in a similar manner. Let's hope this poor driver doesn't suffer the same grisly fate.

Now, this one is downright weird. In Jurassic Park III, Paul Kirby loans his satellite phone to their plane's pilot. The Spinosaurus swiftly swallows said pilot, but the survivors later hear the phone's ringtone. They turn around to see their saurian pursuer standing behind them. So much for the element of surprise.

Players focusing on this specific Spinosaurus on Isla Sorna will hear that familiar jingle. Putting aside the fact that it's still functional after all this time, the phone "left the premises" following the animal's digestion. In short, the dinosaur shouldn't be ringing, but at least it's a handy way to ID him.

Another curious remnant from the third film, this parasail has seen some action. First, the Kirbys' son used it to glide through the air and land on the island. Alan Grant's friend, Billy, later salvaged the sail and wielded it during the thrilling Pteranodon chase. Following that logic, it should still be in the super-sized birdcage.

Instead, it's simply caught in the trees of Site B. The developers could have stashed it in one of the aviaries, but it might not have been as visible to the naked eye. Plus, it was tangled in the foliage earlier in the film. Perhaps that moment was the subject of this homage. Regardless, it's an unexpected reminder of a silly series entry.

This mode presented what-if scenarios based on each film. Naturally, it's peppered with iconography, characters, and even plot beats from those films. The visitor centor from the original classic and the San Diego amphitheater from The Lost World are just a couple of examples. From this perspective, Chaos Theory can be considered one, giant Easter Egg.

It's designed to harken back to the past, enticing fans to dive in and experience those warm, nostalgic feelings ingrained in the series. Even the name is a tongue-in-cheek reference. Though it's a real scientific field, chaos theory was a prominent talking point for popular character Ian Malcolm. Considering he's pretty high on himself, the eccentric cynic would probably appreciate the tribute.

What Really Killed the Dinosaurs? Not Asteroids, According to a Princeton Scientist

The last of the non-avian dinosaurs...

A grade I listed dinosaur statue in London...

About 48 million years ago, an owl swooped...

17 of the Coolest Dinosaur Toys for Kids of all Ages

It’s time to get shopping. If you’re looking...