After both Jurassic World and its sequel Fallen Kingdom grossed over $1 billion at the worldwide box office, it wasn’t long before Universal was asking for a third one. Chris Pratt and Bryce Dallas Howard are set to reprise their roles, but Colin Trevorrow, the writer of all three Jurassic World movies and director of the first and third ones, has also promised that there are some characters in Fallen Kingdom who “you’ll realize are major characters” in the third movie.

But just like Jeff Goldblum returned to the role of Ian Malcolm last summer, we could also see the return of some gone-but-not-forgotten characters from the original series. So, here are 5 Characters We Want To See Return In Jurassic World 3 (And 5 We Don’t). 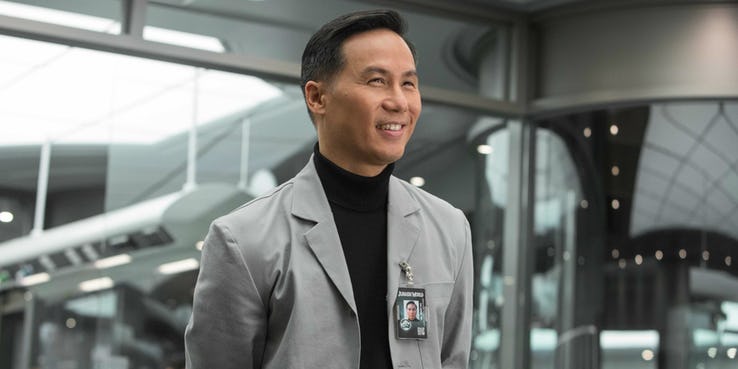 B.D. Wong was the only actor from the original Jurassic Park movies to appear in 2015’s Jurassic World. He was joined by Jeff Goldblum in Fallen Kingdom when he returned again. Although Dr. Wu is one of the series’ best characters, let’s face it: he’s been the villain enough times now.

There’s only so many times we can watch this scientist betray everyone. And in a world infested with dinosaurs, the plot will likely revolve around the effort to contain them, rather than make money out of them, so there won’t be room for Dr. Wu in the story anymore.

Jeff Goldblum’s Dr. Ian Malcolm made a reappearance in Fallen Kingdom that was brief, yet well-received by fans. Pretty much anything you can get Jeff Goldblum to appear in is going to get an enthusiastic response from moviegoers, because he’s staggeringly popular, especially since playing the Grandmaster to hilarious effect in Thor: Ragnarok.

If he’s back in Jurassic World 3, it would be great to see a more fleshed-out role with more memorable quips like, “When you gotta go, you gotta go.” His line, “Welcome to Jurassic World,” that closed out Fallen Kingdom was intriguing and unforgettable, particularly with Goldblum’s spot-on delivery, but we need to see Ian Malcolm being Ian Malcolm again. We need to see him face off with fellow quipper Owen Grady, too, since Chris Pratt didn’t share any scenes with Goldblum in last year’s dino sequel.

However, Vaughn’s Jurassic Park character Nick Van Owen didn’t make enough of an impact in the movie in which he appeared for his return to be a monumental moment. Fans won’t gasp at the sight of him in the same way they did for Jeff Goldblum in Fallen Kingdom (well, they might, but that would be because Vince Vaughn made a surprise appearance in the movie, not because Nick Van Owen has returned to the big screen).

Although Fallen Kingdom was met with mixed reviews from critics (and fans weren’t too pleased either), Dr. Zia Rodriguez – played by Daniella Pineda – was an excellent addition. She was a strong and fearless former Marine who always did the right thing and got plenty of laughs along the way.

There was a scene in Fallen Kingdom that revealed Zia to be a lesbian that was cut for time. It would be interesting to explore this part of her character in the threequel instead. She showed real promise in Fallen Kingdom and has the potential to become a fan favorite with a larger role in Jurassic World 3.

Justice Smith is a fine young actor. It looks like he’ll be the only thing grounding the new Detective Pikachu movie. But his character in Jurassic World: Fallen Kingdom was just annoying.

He was supposed to be the comic relief, but he was too whiny to be funny. Everything frightened him and he was barely competent. He didn’t like stepping out of his comfort zone and going to Isla Nublar took him out of his comfort zone. That’s about as far as this character can go with his development. He didn’t make much of a splash and if he’s not in the threequel, he won’t be missed.

Steven Spielberg’s initial sequel to Jurassic Park, The Lost World, was not as well-received by audiences or critics as its predecessor. Pretty much the entire original cast was replaced, the runtime dragged on a little bit, and the third act was silly.

However, the movie did have a lot of incredible action sequences, and it gave us a great new character addition: Julianne Moore’s Dr. Sarah Harding. Moore’s star has only continued to rise in the couple of decades since her Jurassic Park appearance, so if there’s any way to fit her into the new sequel, fans will be very pleased.

The human cloning subplot in Jurassic World: Fallen Kingdom was an interesting way to expand the franchise’s fictional universe, and it explored – or rather, scratched the surface of, but still – what else could be done with the technology used to bring back the dinosaurs.

But Maisie Lockwood made a really stupid decision at the end of the movie when she pressed the big red button to unleash all the dinosaurs into the world. She felt a sort of kindred spirit with the legions of prehistoric beasties, having just found out she’s a clone and therefore feeling like they were her brethren. It was pretty lame.

Laura Dern has already made an appearance in one rebooted sci-fi franchise with her role as Vice Admiral Holdo in Star Wars: The Last Jedi, but it’s high time she returned to the role of Dr. Ellie Sattler. It makes sense that she wouldn’t want to return to Isla Nublar, explaining her absence in the first Jurassic World movie and its sequel.

But now that the dinosaurs have come to mainland America, she won’t be able to avoid the action. The plot could concern every dino expert from the previous Jurassic Park movies joining together to try to contain the dinosaur invasion.

While no movie in the Jurassic Park franchise has been truly acclaimed by critics since the first one, it’s arguable that Jurassic Park III is the worst one of the bunch. Fans might be open to William H. Macy returning to the franchise after debuting in Jurassic Park III, since he’s a popular actor and he’s even more popular now due to his performance in Shameless, but not the Billy Brennan character.

He was the token dinosaur egg thief who supposedly redeemed himself later when he saved the missing kid’s life. He was an eager, annoying grad student and the movies are better off without him.

Sam Neill is as known to a modern audience as anyone, thanks to his role in Peaky Blinders, so it’s about time we saw Dr. Alan Grant return to action in the Jurassic World trilogy. Director Colin Trevorrow hinted at the return of both Sam Neill and Laura Dern to the franchise when he was told that audiences might feel cheated if their characters didn’t show up.

He said, “I totally agree with that. I would feel robbed too, yeah.” It seems like it’s all a matter of whether or not he can work them into the story organically, but hopefully there’s room for them.

Jurassic World 3 Reveals We Will See Dinosaurs in the Snow?

A new image from the upcoming Jurassic World 3...

By analyzing a tooth from the first fossil...

A collaboration led by the Royal Ontario...

There are few films in history that...

Paleontologists from Universiti Malaya (UM) have discovered the fossil of a stegodon, an extinct elephant, in a limestone cave in...

Jurassic World: Camp Cretaceous fixes a major mistake that young Timothy made in the original movie when identifying big dinosaurs....

Spain is set to launch a Jurassic Park-style dinosaur theme park with life-size dinosaurs, tapas kiosks and a zip line,...

A new species of an ancient marine reptile evolved to strike terror into the hearts of the normally safe, fast-swimming fish has been...

Paleontologists in Mongolia have found the fossilized skeletal remains from a new genus and species of two-fingered oviraptorosaur...

Paleontologists have discovered remarkable evidence of the sensory capabilities in the fossilized skin of a 155-million-year-old...