After a months-long delay, Sam Neill will finally get to suit up for Jurassic World: Dominion, as he begins filming his scenes this week.

Sam Neill will officially begin filming his scenes for Jurassic World: Dominion this week. Dominion was one of the many films impacted by the COVID-19 pandemic earlier this year, with its production shutting down back in March. While director Colin Trevorrow continued editing work remotely, physical production was halted for months on end. Dominion finally got back to work in July, and despite rumors that things quickly halted once again because of positive COVID cases, the film has continued on. As of right now, it also holds onto its June 2021 release date, though some still wonder if the production delay could result in it getting pushed back.

There's a lot of anticipation surrounding Dominion, and it's not just because it will be the final Jurassic World film. In addition to several returning Jurassic World stars (led by Chris Pratt and Bryce Dallas Howard), Dominion will feature the original Jurassic Park trio of Neill, Jeff Goldblum, and Laura Dern. Goldblum previously appeared in 2018's Jurassic World: Fallen Kingdom, but his scenes only amounted to a quick cameo. Dominion promises to include all three in much larger roles, something Neill has already assured fans of.

After months of setbacks, Neill is finally ready to step back into the role of Dr. Alan Grant. Neill shared on social media that he'll be headed to Dominion's set this week, sharing the message, "Hold onto your hats- gettin' my old one back on this week , and facing off dinosaurs once again." He also called Dominion the "Best yet," and shared his excitement at facing off with the dinosaurs once again. You can see his full post down below. 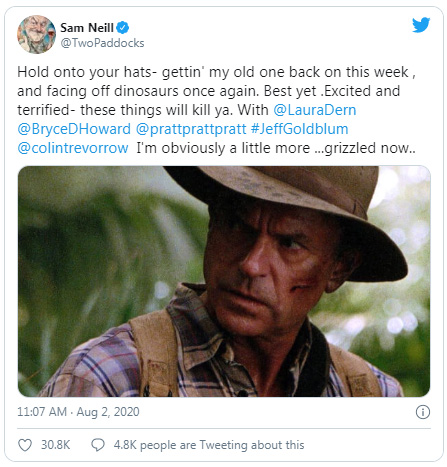 Exactly what will bring Dr. Grant back into the fray has yet to be revealed, as Dominion's plot is still being kept under wraps. When considering the end of Fallen Kingdom, it does seem like Dominion will confront the terrifying reality of dinosaurs being let loose in the world; perhaps Dr. Grant is brought in to help wrangle them back into their holds. Regardless of why he's back, it'll definitely be a thrill to see him back in action with Dern and Goldblum.

Based on some Dominion set photos that have emerged, it also seems certain that the film is headed to the Arctic. This movie truly is trying to go where no other Jurassic film - World or otherwise - has gone before. Considering how this will be the last one, that might be for the best. This franchise has been around for a while, and it's good that it'll continue to push things into new territories. Its stars, Neill included, have already spoken very favorably about Dominion, so hopefully it manages to live up to expectations when it roars into theaters next year.

One of the biggest, meanest dinosaurs...

The Walking Dead: Fossils on the Move Can Distort Patterns of Mass Extinctions

Using the fossil record to accurately...

Utah Family Digs up Ancient Bones in Their Backyard

What started with a little landscaping,...

Dinosaurs are just running around America...

A new genus and species of small-bodied fossil ape that lived during the Middle Miocene epoch has been identified from a...

When you look back on the Jurassic Park films, it's surprising just how many big names appeared in them. Samuel Jackson? Check....

It's not revolutionary to say that Jurassic Park movies live or die by their dinosaurs. It's the first world in the title and about 90...

Jeff Goldblum opened up about his role in the upcoming movie...

Paleontologists in Mongolia have found the fossilized remains of Minjinia turgenensis, a new genus and species of placoderm fish...

Man Spends £1,600 To Surprise Wife With 12ft Dinosaur Replica – But It Doesn’t Go To Plan

After a few weeks of warm weather, Deborah Shaw thought her garden looked a little overgrown and asked her husband Adrian to tidy it...

Kids today have access to all kinds of dino and other information with a few clicks, including ...