Maybe you think of “Jurassic Park” as the movie that surpassed “E.T.” to become the biggest Steven Spielberg film ever, as well as one of the biggest hits of all time. Or maybe you think of it as the film that, through its landmark CGI dinosaurs, helped usher in the age of digital film making. Or maybe you just think of it as the movie that scared the pants off you when you saw it in theaters over two decades ago and every time you’ve watched it since on TV.

However you regard it, “Jurassic Park” has seemed a ubiquitous, inescapable fixture of pop culture for 20 years. And yet there are still things about it you may not know, such has how Spielberg chose his cast, how several teams of effects artists came together to build those pioneering dinosaurs, and whether or not it would really be possible to clone dinosaurs from ancient DNA as the geneticists in the movie did. Read on to unearth these and other not-quite-fossilized secrets from “Jurassic Park.”

1. Spielberg, a lifelong dinosaur enthusiast who preferred the prehistoric lizards in “King Kong” to the big gorilla, learned about Michael Crichton’s dinosaur-cloning tale from the author himself a year before he published his 1990 bestseller. The pair had been developing a screenplay based on Crichton’s own early medical career. That project evolved into the long-running TV drama “ER.”

2. That preexisting partnership with Crichton helped Spielberg to win the bidding for the movie rights to “Jurassic Park.” Several other directors were in the running, including Tim Burton, Richard Donner (“Lethal Weapon”), Joe Dante (“Gremlins”), and (according to Spielberg) James Cameron.

3. Laura Dern, who played Dr. Ellie Sattler, recalled in Entertainment Weekly’s recent oral history of “Jurassic Park” how Spielberg pitched her the movie: “I know that you’re doing your independent films, but I need you to be chased by dinosaurs, in awe of dinosaurs, and have the adventure of a lifetime. Will you do this with me?” Her “Wild at Heart” co-star Nicolas Cage, who said he’d always dreamed of being in a dinosaur movie, urged her to say yes.

4. Richard Attenborough, who played park impresario John Hammond, was best known as a director of biopics (“Gandhi,” “Chaplin”). Before that, he’d been a celebrated actor, but he’d put acting on hold after 1979, when his directing career took off. “Jurassic Park” marked his first role in 14 years, and it resuscitated his acting career at age 69, leading to prominent roles in “Miracle on 34th Street” (as Kris Kringle) and “Elizabeth,” among others. 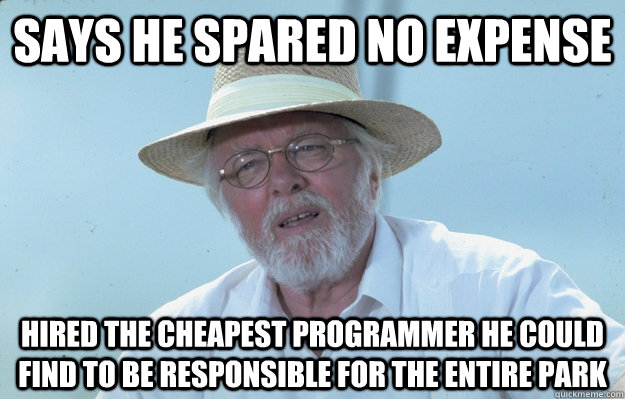 5. To cast Hammond’s granddaughter, Lex, Spielberg auditioned a number of girls and asked them to record their screams. Ariana Richards recalled that she won the role because she was the only one whose taped scream was loud enough to awaken a sleeping Kate Capshaw (a.k.a. Mrs. Spielberg) and send her scurrying down the hall to see if her children were all right.

6. Joseph Mazzello, who would play Lex’s brother, Tim, had enjoyed some success as a child actor (“Presumed Innocent”), but when he screen-tested for a role in Spielberg’s 1991 film “Hook,” the director told him he was too young. He recalled that Spielberg told him, “Don’t worry about it, Joey. I’m going to get you in a movie this summer.” Looking back, Mazzello (who would go on to star in Spielberg’s World War II mini-series “The Pacific” as an adult) called the “Jurassic Park” consolation prize a “pretty good trade.”

7. For the animatronic dinosaurs, Spielberg hired Stan Winston on the basis of his work creating the alien queen in “Aliens.” Winston built the life-size lizards, including the Tyrannosaurus rex and triceratops. Spielberg hired stop-motion puppeteer Phil Tippett to animate model dinosaurs that would be superimposed in post-production, and Dennis Muren (fresh from creating the molten-metal morphing effects in “Terminator 2: Judgment Day”) to see if dinosaurs could be created using computer-generated imagery.

8. In fact, the dinosaurs Muren created on the computer were the first major flesh-and-blood CGI creatures in movie history. When he screened for the rest of the filmmakers an early test of wire-frame dinosaurs in motion, Tippett realized he was out of a job. “I think I’m extinct,” he told Spielberg, who liked the quip so much that he put it in the movie. (Actually, Tippett stayed on as an adviser to the computer animators, using his knowledge of paleontology and pantomime to instruct the effects artists in how dinosaurs should move.) 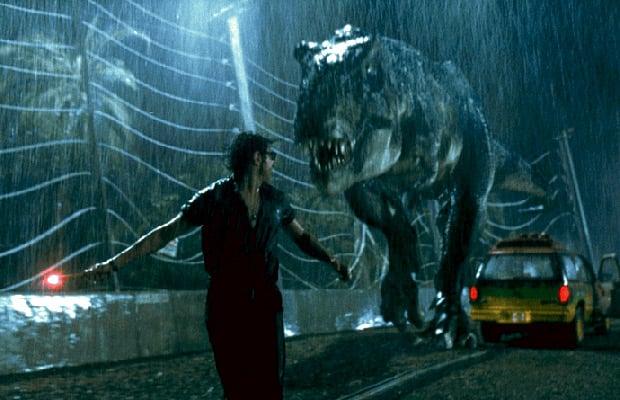 10. The velociraptors, however, were done Godzilla-style, with puppeteers in lizard suits. The man-sized velociraptors were much bigger than the real species, though shortly before the movie’s release, paleontologists discovered a larger related species, the Utahraptor. Winston joked, “We made it, then they discovered it.”

11. Sound designer Gary Rydstrom combined a variety of animal cries to make the various dinosaur roars. The cow-like brachiosaurus’ bellow was a blend of donkey and whale. Whale sounds were also used for the Tyrannosaurus rex, along with the sound of a tiger, an alligator, and a baby elephant. For the sound the T. rex made when it killed the lawyer, Rydstrom used a recording of his own Jack Russell terrier grappling with a rope toy, played at half-speed. The most complex was the velociraptor, a mix of tortoise, horse, goose, walrus, dolphin, and African crane.

12. For all the work that went into creating lifelike dinosaurs, the lizards got just 15 minutes of screen time in the 127-minute movie.

13. The iconic shot of the water rippling in a cup in the car as the stomping T. rex approaches was inspired by Spielberg watching his car interior vibrate as he listened to bass-heavy funk band Earth, Wind and Fire. To create the water effect, he placed guitar strings under the dashboard and had a crew member pluck them.

14. Sam Neill, who played Dr. Alan Grant, has a scar on his left hand from the scene where he tries to distract the T. rex with a burning flare. Some flaming phosphorus fell from the flare and got trapped under Neill’s wristwatch.

15. Before the last day of shooting, Hurricane Iniki, the most powerful storm in Hawaiian history, hit the set. The cast and crew were trapped in their hotel on Kauai. Spielberg helped bide the time by telling ghost stories to the kids. Others passed the time reading the only piece of literature they could find, a Victoria’s Secret catalogue.

16. When the movie went into post-production, Spielberg was already in Poland shooting “Schindler’s List.” He supervised the effects work on his dinosaur thrill ride while filming the horrific Holocaust drama.

17. Despite the hurricane, the shoot finished 12 days ahead of schedule and on budget. It cost $63 million to make and another $65 million to market.

18. In its initial release, “Jurassic Park” earned $357 million in North America and a total of $914 million worldwide. That was enough to surpass Spielberg’s “E.T.” to take the record as the biggest hit movie of all time, a record it held for nearly five years, until “Titanic.”

22. To this day, Dern says she’s recognized as “the girl who put her hand in the dinosaur poo.” She adds that kids have refused to shake her hand, “as though I hadn’t washed.”

23. The CGI dinosaurs of “Jurassic Park” have had a far-reaching legacy, having convinced some of the world’s most imaginative filmmakers that the technology finally existed to put whatever they saw in their mind’s eye onto the screen. They led Winston and James Cameron to form the Digital Domain effects house, and it led Stanley Kubrick to collaborate with Spielberg on “A.I. Artificial Intelligence,” the robot fable he’d dreamed of making for decades (Spielberg would finish the film in 2001, two years after Kubrick’s death). They inspired George Lucas to make the three “Star Wars” prequels and Peter Jackson to make “The Lord of the Rings” trilogy, “King Kong,” and the “Hobbit” trilogy.

24. In April, 2013, Universal released a 3D version of “Jurassic Park” in theaters. The conversion from 2D cost $10 million, and it earned the 20-year-old film another $45.4 million in domestic ticket sales.

25. Could scientists really clone dinosaurs from DNA in dinosaur blood found in mosquitoes preserved in amber? Probably not. For one thing, even petrified DNA would probably have degraded too much in the 65 million years since the last dinosaurs died out. Plus, there’s no contemporary equivalent to a dinosaur egg in which to incubate the embryos. Still, Jack Horner, the paleontologist who served as a consultant on the film, said he thought it might be possible to genetically modify a chicken embryo to activate dormant genes for dinosaur-like traits. Not quite the same thing, alas.

Paleontologist Who Named a Dinosaur 'Dynamoterror' Explains Why He Did It

A terrifying meat-eater gets a sweet origin...

Paleontologists have found that the thin...

Antarctica Fossils on Display at The Burke Museum

Burke Museum and University of Washington...

Jurassic Mark: This Japan Hotel is Manned by Robot Dinosaurs

The reception at the Henn na Hotel east of...

How Long Did The Dinosaur Extinction Last?

What time scale would the extinction of the...

A new genus and species of chasmosaurine...

Medium-Size Dinos Are Missing From The Fossil Record. Here's Why.