Utahraptor (meaning "Utah's predator" or "Utah's thief") is a genus of theropod dinosaurs. It contains a single species, Utahraptor ostrommaysorum, which is the largest-known member of the family Dromaeosauridae. Fossil specimens date to the upper Barremian stage of the early Cretaceous period (in rock strata dated to 126 ± 2.5 million years ago).

The holotype specimen of Utahraptor is fragmentary, consisting of skull fragments, a tibia, claws and some caudal (tail) vertebrae. These few elements suggest an animal about twice the length of Deinonychus. Like other dromaeosaurids, Utahraptor had large curved claws on their second toes. One claw specimen is preserved at 22 centimeters (8.7 in) in length and is thought to reach 24 cm (9.4 in) restored.

The largest described U. ostrommaysorum specimens are estimated to have reached up to 5.7 meters (19 ft) long and somewhat less than 500 kilograms (1,100 lb) in weight, comparable to a grizzly bear or polar bear in size. However, the 2001 Kirkland discovery indicates the species may be far heavier than previously estimated.

It is thought that Utahraptor is closely related to the smaller Dromaeosaurus and the giant Mongolian and North American dromaeosaurid genera Achillobator and Dakotaraptor, based on cladistic analysis.

Although feathers have never been found in association with Utahraptor specimens, there is strong phylogenetic evidence suggesting that all dromaeosaurids possessed them. This evidence comes from phylogenetic bracketing, which allows paleontologists to infer traits that exist in a clade based on the existence of that trait in a more basal form. The genus Microraptor is one of the oldest-known dromaeosaurids, and is phylo­genetically more primitive than Utahraptor. Since Microraptor and other dromaeosaurids possessed feathers, it is reasonable to assume that this trait was present in all of Dromaeosauridae. Feathers were very unlikely to have evolved more than once, so assuming that any given dromaeosaurid, such as Utahraptor, lacked feathers would require positive evidence that they did not have them. So far, there is nothing to suggest that feathers were lost in larger, more derived species of dromaeosaurs.

In a 2001 study conducted by Bruce Rothschild and other paleontologists, two foot bones referred to Utahraptor were examined for signs of stress fracture, but none were found.

The first specimens of Utahraptor were found in 1975 by Jim Jensen in the Dalton Wells Quarry in east-central Utah, near the town of Moab, but did not receive much attention. After a find of a large foot-claw by Carl Limoni in October 1991, James Kirkland, Robert Gaston, and Donald Burge uncovered further remains of Utahraptor in 1991 in the Gaston Quarry in Grand County, Utah, within the Yellow Cat and Poison Strip members of the Cedar Mountain Formation. Radiometric dating has shown that these parts of the Cedar Mountain Formation were deposited about 124 million years ago. The type specimen, CEU 184v.86, is currently housed at the College of Eastern Utah Prehistoric Museum, although Brigham Young University, the depository of Jensen's finds, currently houses the largest collection of Utahraptor fossils.

The type species (and only known species of Utahraptor), Utahraptor ostrommaysorum, was named by Kirkland, Gaston, and Burge in June 1993 for the American paleontologist John Ostrom from Yale University's Peabody Museum of Natural History, and Chris Mays of Dinamation International. Originally, in the specific name, the singular genitive ostrommaysi was used but, in 2000, this was emended by George Olshevsky to the plural. Earlier, it had been intended to name the species "Utahraptor spielbergi" after film director Steven Spielberg, in exchange for funding paleontological research, but no agreement could be reached on the amount of financial assistance. 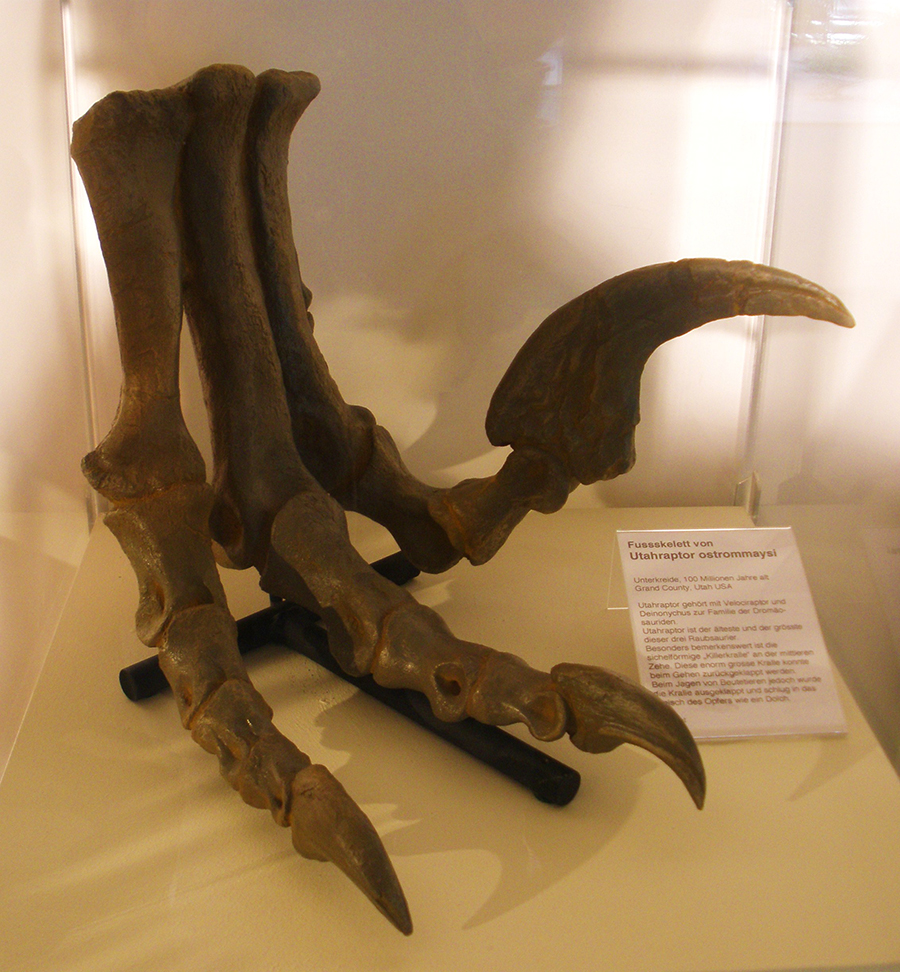 According to the authors of its description, Utahraptor had an "important [ecological] role as a major carnivore of the fauna of the present-day Arks region in the early Cretaceous", and could probably attack prey larger than itself. Group hunting of individuals of at least 3.5 m and 70 kg, if proven, could have killed 8 m prey of a weight of one to two tonnes. According to paleontologist Gregory S. Paul, Utahraptor was not particularly fast and would have been an ambush hunter that preyed on large dinosaurs such as the contemporary iguanodontians and therizinosauroids it shared its environment with. Its robust build and large sickle claw indicates it was well suited to hunting such prey. Like other dromaeosaurine dromaeosaurids, it may have also relied heavily on its jaws to dispatch prey more than other types of dromaeosaurids such as those in the velociraptorinae.

Utahraptor lived in the lower part of the Cedar Mountain Formation, which during the Barremian was a semiarid area with floodplain prairies, riverine forests, and open woodlands. There is believed to have been a short wet season. Other fauna that were contemporaneous with the dromaeosaurid in the Yellow Cat and Poison Strip Members included the therizinosauroids Falcarius and Martharaptor, the sauropods Cedarosaurus, Mierasaurus, Venenosaurus and Moabosaurus, the iguanodonts Iguanocolossus, Planicoxa, Cedrorestes and Hippodraco, the hadrosauroid Eolambia, and the ankylosaur Gastonia. Fellow dromaeosaurid Yurgovuchia, the troodontid Geminiraptor and the ornithomimosaur Nedcolbertia also dwelled here. Birds, fish, mammals, turtles, crocodiles, and pterosaurs are also known from the formation, creating a diverse fauna.