Compsognathus is a genus of small, bipedal, carnivorous theropod dinosaurs. Members of its single species Compsognathus longipes could grow to the size of a turkey. They lived about 150 million years ago, the Tithonian age of the late Jurassic period, in what is now Europe. Paleontologists have found two well-preserved fossils, one in Germany in the 1850s and the second in France more than a century later. Today, C. longipes is the only recognized species, although the larger specimen discovered in France in the 1970s was once thought to belong to a separate species and named C. corallestris. 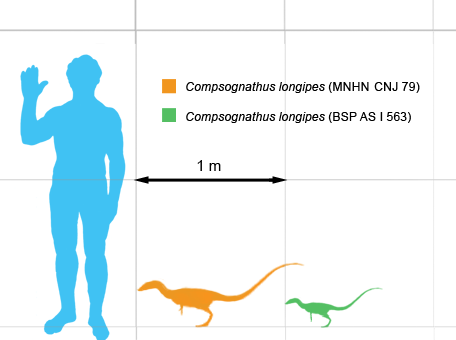 Many presentations still describe Compsognathus as “chicken-sized” dinosaurs because of the small size of the German specimen, which is now believed to be a juvenile. Compsognathus longipes is one of the few dinosaur species for which diet is known with certainty: the remains of small, agile lizards are preserved in the bellies of both specimens. Teeth discovered in Portugal may be further fossil remains of the genus.

Although not recognized as such at the time of its discovery, Compsognathus is the first theropod dinosaur known from a reasonably complete fossil skeleton. Until the 1990s, it was the smallest known non-avialan dinosaur; earlier it had been incorrectly thought to be the closest relative of Archaeopteryx.

Compsognathus also holds the distinction of being the first dinosaur genus to be portrayed with feathers, by Thomas Henry Huxley in 1876.

The genus Compsognathus gives its name to the family Compsognathidae, a group composed mostly of small dinosaurs from the late Jurassic and early Cretaceous periods of China, Europe and South America. For many years it was the only member known; however in recent decades paleontologists have discovered several related genera. The clade includes Aristosuchus, Huaxiagnathus, Mirischia, Sinosauropteryx, and perhaps Juravenator and Scipionyx. At one time, Mononykus was proposed as a member of the family, but this was rejected by Chen and coauthors in a 1998 paper; they considered the similarities between Mononykus and the compsognathids to be an example of convergent evolution. The position of Compsognathus and its relatives within the coelurosaur group is uncertain. Some, such as theropod expert Thomas Holtz Jr. and co-authors Ralph Molnar and Phil Currie in the landmark 2004 text Dinosauria, hold the family as the most basal of the coelurosaurs, while others as part of the Maniraptora.