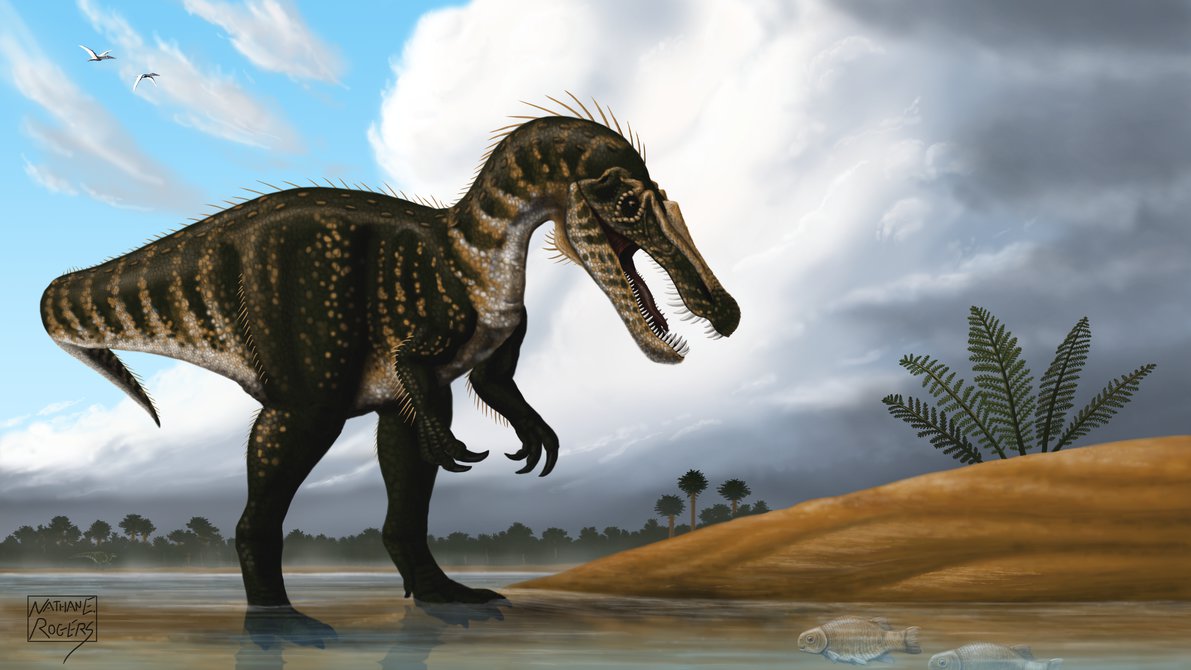 Baryonyx is a genus of theropod dinosaur which lived in the Barremian stage of the early Cretaceous Period, about 130–125 million years ago. The holotype specimen was discovered in 1983 in Surrey, England, and the animal was named B. walkeri in 1986. The genus name, Baryonyx, means “heavy claw” and alludes to the animal’s very large claw on the first finger; the specific name (walkeri) refers to its discoverer, amateur fossil hunter William J. Walker. Fragmentary specimens were later discovered in other parts of the United Kingdom and Iberia. The holotype specimen is one of the most complete theropod skeletons from the UK, and its discovery attracted media attention.

Baryonyx was between 7.5 and 10 m (25 and 33 ft) long and weighed between 1.2 and 1.7 t (1.3 and 1.9 short tons), but the holotype specimen may not have been fully grown. It had a long, low snout and narrow jaws, which have been compared to those of a gharial. The tip of the snout expanded to the sides in the shape of a rosette. Behind this, the upper jaw had a notch which fitted into the lower jaw (which curved upwards in the same area). It had a triangular crest on the top of its nasal bones. Baryonyx had many finely serrated, conical teeth, with the largest teeth in front. The neck was less curved than that of other theropods, and the neural spines of its dorsal vertebrae increased in height from front to back. It had robust forelimbs, with the eponymous first-finger claw measuring about 31 cm (12 in) long.

Now recognised as a member of the family Spinosauridae, Baryonyx‘s affinities were obscure when it was discovered. Apart from the type species (B. walkeri), some researchers have suggested that Suchomimus tenerensis belongs in the same genus and that Suchosaurus cultridens is a senior synonym; subsequent authors have kept them separate. Baryonyx was the first theropod dinosaur demonstrated to have been piscivorous (fish-eating), as evidenced by fish scales in the stomach region of the holotype specimen. It may also have been an active predator of larger prey and a scavenger, since it also contained bones of a juvenile Iguanodon. The creature would have caught and processed its prey primarily with its forelimbs and large claws. Baryonyx lived near water bodies, in areas where other theropod, ornithopod, and sauropod dinosaurs have also been found.

The Weald Clay Formation consists of sediments of Hauterivian (Lower Weald Clay) to Barremian (Upper Weald Clay) age, about 130–125 million years old. The B. walkeri holotype was found in the latter, in clay representing non-marine still water, which has been interpreted as a fluvial or mudflat environment with shallow water, lagoons, and marshes. During the Early Cretaceous, the Weald area of Surrey, Sussex, and Kent was partly covered by the large, fresh-to-brackish water Wealden Lake. Two large rivers drained the northern area (where London now stands), flowing into the lake through a river delta; the Anglo-Paris Basin was in the south. Its climate was sub-tropical, similar to the present Mediterranean region. Since the Smokejacks Pit consists of different stratigraphic levels, fossil taxa found there are not necessarily contemporaneous. Dinosaurs from the locality include the ornithopods Mantellisaurus, Iguanodon, and small sauropods. Other vertebrates from the Weald Clay include crocodiles, pterosaurs, lizards (such as Dorsetisaurus), amphibians, sharks (such as Hybodus), and bony fishes (including Scheenstia). Members of ten orders of insects have been identified, including Valditermes, Archisphex, and Pterinoblattina. Other invertebrates include ostracods, isopods, conchostracans, and bivalves. The plants Weichselia and the aquatic, herbaceous Bevhalstia were common. Other plants found include ferns, horsetails, club mosses, and conifers.

Other dinosaurs from the Wessex Formation of the Isle of Wight include the theropods Neovenator, Aristosuchus, Thecocoelurus, Calamospondylus, and Ornithodesmus; the ornithopods Iguanodon, Hypsilophodon, and Valdosaurus; the sauropods Ornithopsis, Eucamerotus, and Chondrosteosaurus; and the ankylosaur Polacanthus. The Papo Seco Formation of Portugal where Baryonyx has possibly been identified is composed of marl, representing a lagoon environment. Other dinosaur remains from the area include fragments tentatively assigned to Mantellisaurus, a macronarian sauropod, and Megalosaurus.