All the Dinosaurs Found in Wales, Mapped | Paleontology World

All the Dinosaurs Found in Wales, Mapped

A guide to all the dinosaurs that have ever been discovered in Wales.

Despite having died out 65 million years ago, dinosaurs have fascinated people ever since the first bones were discovered.

From Velociraptors chasing children round a kitchen in Jurassic Park to Dippy on show at the Natural History Museum, these prehistoric beasts are fascinating.

And several dinosaur remains have been discovered in Wales.

But you'll notice that all the dinosaur finds have come in a relatively small area of south Wales, roughly between Porthcawl and Penarth.

Why are all the fossils in Wales found in roughly the same area?

Dr Caroline Buttler, head of paleontology at National Museum of Wales, explains it is down to the age of the rocks.

She said: "The reason the finds are all in that area is due to the age of the rocks. They are mainly the Triassic and Jurassic period which is why we find dinosaurs. In west Wales the rocks are much older, before dinosaurs."

But it's actually incredibly rare to find dinosaurs even in this area.

"The rock around here was marine rock. That is why the find by the Hanigan brothers (see below) was so exceptional. The dinosaur died and was washed into the sea where it became fossilised.

"What we do get is a lot of ichthyosaurs. They lived at the time of dinosaurs. They had a body the shape of dolphins, sharp teeth and were canivourous. We have lots of skulls and whole specimins."

But you don't have to go far along the southern coast of Wales before your chances of finding dinosaurs is reduced to zero.

"Once you get to Ogmore the rock is already too old for dinosaurs." said Dr Buttler.

It is important to bear in mind that this is not every fossil. Not all fossils discovered are dinosaurs. And these discoveries are almost never full skeletons. They often get reclassified decades later once more data becomes available.

So what were they?

If you're a fan of the T. rex you are going to be a little bit disappointed. The Tyrannosaurus rex, or "king of the tyrant lizards", has not been discovered in Wales.

But there have been some pretty astonishing finds.

This distant relative of the T. rex was discovered on Lavernock beach by fossil-hunting brothers Nick and Rob Hanigan, from Llantwit Major.

The pair made the “discovery of a lifetime” when they found the fossilised skull and bones on the beach in the Vale of Glamorgan after storms in spring 2014. 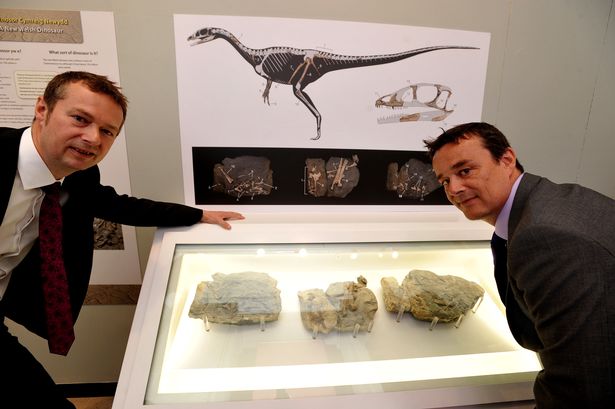 The creature, which dates back 201 million years, was named Dracoraptor hanigani after them.

Dracoraptor is Latin for “dragon robber” in fitting with the national symbol of Wales.

Although a meat-eater, the newly-discovered dragon was nothing like as terrifying as its later cousin.

It stood on two legs, and was a small, agile animal probably no more than about 2.2ft tall and 6.5ft long with a long tail that may have been used for balance.

Since most of its bones were not yet fully formed, experts believe the specimen discovered here may have been a youngster.

Scientists have recovered about 40% of the dinosaur’s skeleton, found embedded in rock at the base of a collapsed coastal cliff at Lavernock Point in March 2014.

At the start of the Jurassic Period, when D. hanigani was alive, the climate of south Wales was much warmer than it is today and dinosaurs were just starting to diversify.

This particular dinosaur is actually named after a Welsh quarry.

Standing about the same size as an adult human it had a dragon shaped head and strong jaw. When fully grown it would have been an amazing three metres long.

This dinosaur was probably omnivorous and would have been an impressive hunter, grasping at its prey with its long front arms.

It was discovered in Pant-y-ffynnon quarry near Cowbridge which is where it gets the "pant" part of its name. Draco means a dragon or mythical creature in latin.

This one is not technically a dinosaur but would have lived alongside pantydraco. This fossil was identified by an undergraduate student from Bristol University.

The research was completed by Emily Keeble, an undergraduate in Bristol’s School of Earth Sciences, as part of her final-year project for her palaeontology degree.

The fossils she studied were collected in the 1950s in Pant-y-ffynnon Quarry, and they belong to a new species of the "Gloucester lizard" Clevosaurus (named in 1939 after Clevum, the Latin name for Gloucester).

In the Late Triassic, the hills of south Wales and the south west of England formed an archipelago that was inhabited by small dinosaurs and relatives of the Tuatara, a reptilian living fossil from New Zealand.

'The teeth were likely adapted to dice pieces of flesh'

The limestone quarries of the region have many caves or fissures containing sediments filled with the bones of abundant small reptile species that give us a unique insight into the animals that scuttled at the feet of the dinosaurs. The fissures are of worldwide importance in for such well-preserved small reptiles.

Emily said: “The new species, Clevosaurus cambrica lived side-by-side with a small dinosaur, Pantydraco, and an early crocodile-like animal, Terrestrisuchus. We compared it with other examples of Clevosaurus from locations around Bristol and South Gloucestershire, but our new beast is quite different in the arrangement of its teeth.”

Professor Mike Benton, Emily’s co-supervisor, added: “We were lucky to find quite a lot of the skeleton and Emily was able to scan the blocks and make 3D reconstructions of the skull, neck, shoulder and arm region.”

Another co-supervisor, Dr David Whiteside, said: “The teeth of Clevosaurus cambric were likely adapted to dice pieces of flesh, so we interpret this little critter as a predator, feeding on insects and other small animals.”

Where is the best place in Wales to find fossils dinosaurs?

Fossil vertebrae of extinct marine reptiles such as ichthyosaurs and plesiosaurs have been found here.

Particularly worthy of investigation are the "bone beds" near Lavernock Point, where you might find fish and reptile teeth, scales and bones, and coprolites (fossilised dung). You can also see dinosaur footprints on this section of coast.

The National Museum of Wales has an Evolution of Wales gallery with a reconstruction of south Wales as it was 200 million years ago, with dinosaur skeletons and footprints.

Walk east to find well-preserved fossils in the boulders and slabs that have been washed toward the sea.

Where else in the UK is a good place for to find dinosaur fossils?

Other good places to for fossil hunting in the UK include:

What dinosaur species are most commonly found in the UK?

The most common species of dinosaur found in the UK is the terrifying meat eater Megalosaurus.

A full list of the most common species are here:

Wales actually has a long history of paleontology 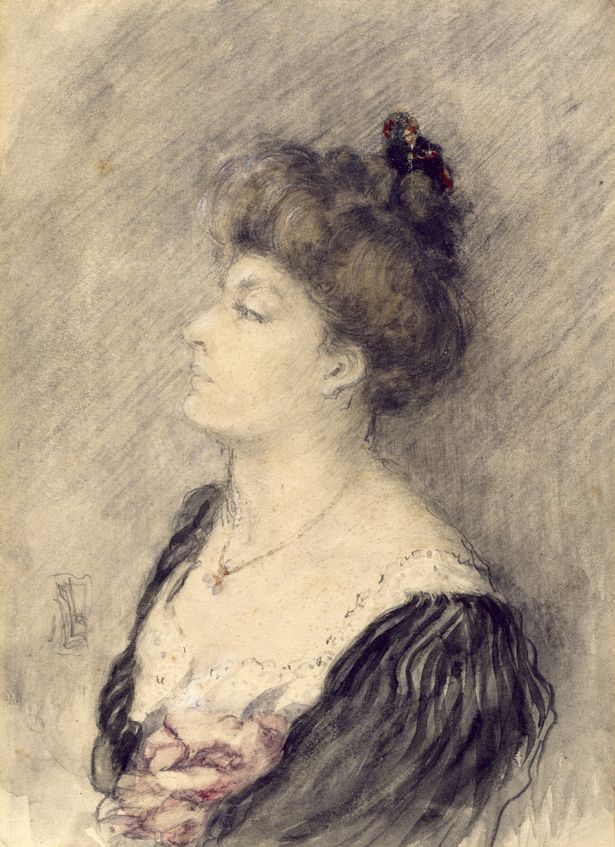 Paleontologist Dorothea Bate was born in Carmarthen and was the first female to work at London's Natural History Museum.