Paleontologists have identified a new genus and species of rebbachisaurid dinosaur from a fossil uncovered in Uzbekistan.

The newly-discovered dinosaur roamed Earth approximately 92 million years ago, during the Turonian stage of the Late Cretaceous period.

Dubbed Dzharatitanis kingi, it belongs to Rebbachisauridae, a large family of plant-eating dinosaurs.

A single isolated vertebra of the new dinosaur was recovered from the Bissekty Formation at Dzharakuduk in Navoi Viloyat, Uzbekistan.

The specimen was found by paleontologists during the URBAC international expedition in 1997.

“This is the first rebbachisaurid reported from Asia and one of the youngest rebbachisaurids in the known fossil record,” Dr. Alexander Averianov of St. Petersburg Zoological Institute and Dr. Hans-Dieter Sues of Smithsonian Institution wrote in their paper.

“The Rebbachisauridae is the second sauropod group identified in the assemblage of non-avian dinosaurs from the Bissekty Formation, in addition to a previously identified indeterminate titanosaurian.” 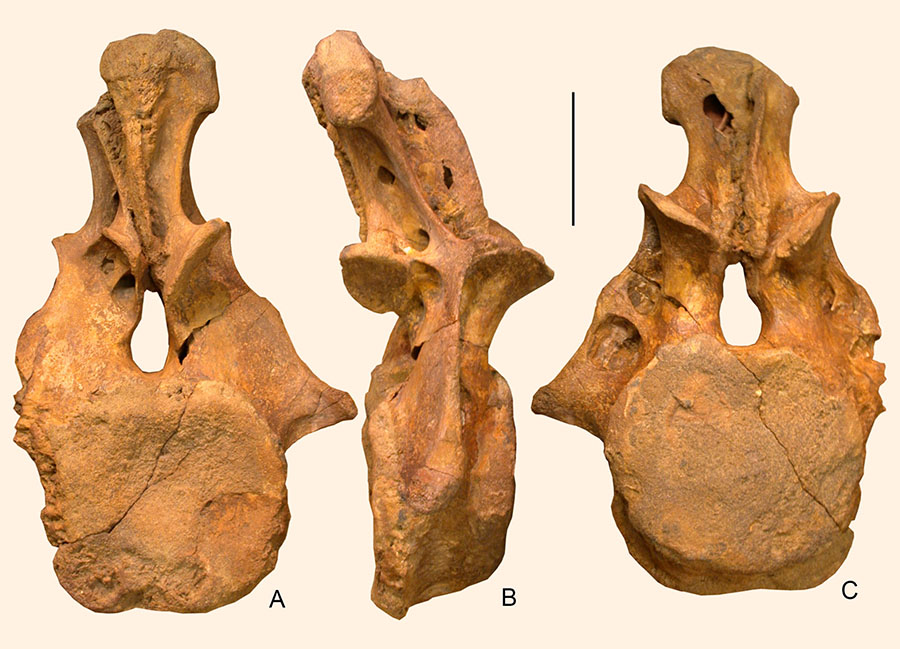 All previous records of rebbachisaurid dinosaurs came from a narrow band extending from southernmost South America through the northeastern South America and northwestern Africa to Europe.

The discovery of Dzharatitanis kingi now considerably extends the known distribution of this group to the east.

It is most likely that these dispersed to Central Asia from Europe but it is not clear when this could have occurred.

“The Rebbachisauridae possibly dispersed from Europe to Asia via a land bridge across the Turgai Strait sometime between the Barremian and Turonian,” the paleontologists wrote.

The discovery is reported in a paper published this month in the journal PLoS ONE.