Paleontologists identified a new species of sauropod that grew long, sharp spikes that resembled a mohawk at the back of their necks.

Called Bajadasaurus pronuspinax, the newly-discovered creatures are believed to be herbivores that walked the surface of Earth from the late Triassic period 230 million years ago to the end of the late Cretaceous 70 million years ago. Fossils of the dinosaur were unearthed in the Bajada Colorada Formation in the Neuquén Basin in Patagonia, Argentina in 2013. 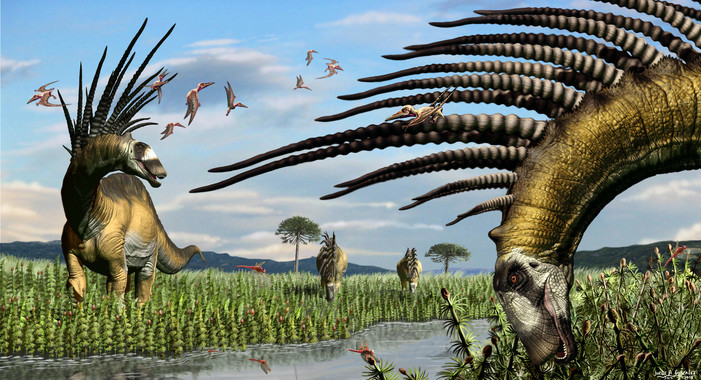 According to the researchers, the fossils that were discovered still had most of its skull and a whole spine bone.

The Bajadasaurus belonged to the subgroup of sauropod (long-necked, four-legged dinosaurs) called dicraeosauridae. The researchers believe that like the Amargasaurus cazaui, another dicraeosauride, the Bajadasaurus' spikes were long, sharp, and thin. They grew along the spine of the creature.

Researchers think that the spikes were used to fight off predators, but they can never be sure. They believe that, instead of a weapon, the dinosaurs used the spikes as a warning device to fend off carnivores.

"A carnivore comes up, sees a gigantic spiny structure and thinks twice," stated paleontologist Pablo Galina, an author of the study, in a conversation with EFE.

They also believe that the spikes were covered by a keratin sheath, similar to horns of antelopes and other mammals.

"We think that had they been just bare bone structures or covered only by skin, they could have been easily broken or fractured with a blow or when being attacked by other animals," explained Galina.

They also think that like camels, the Bajadasaurus had humps where they stored fat in between spikes. The researchers shared that the spikes might have also acted as a kind of "sail" to regulate body temperature or make the dinosaur more sexually attractive to potential mates.

The Giganotosaurus carolinii, the biggest carnivorous dinosaur of all time, was also found in the Neuquén Basin in Argentina. It was first discovered in 1993.

The researchers believe that the Giganotosaurus, which lived during the late Cretaceous period, might have fed on the Bajadasaurus.

The newly-discovered dinosaur is the subject of the paper published in the journal Scientific Reports.