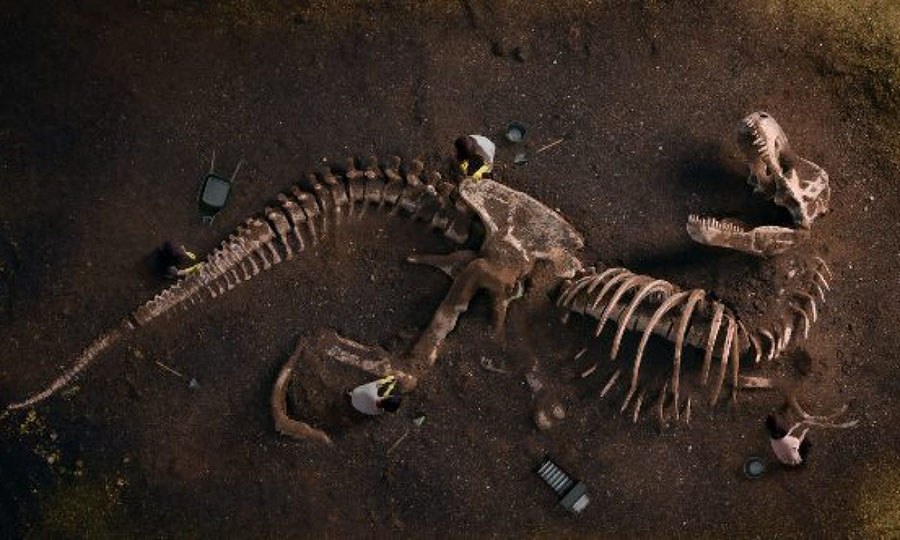 Everyone has heard of dinosaurs, and for most, the creatures are as fascinating as they are terrifying. But while scientists continue to uncover truths about these ancient creatures, what we know about their lives and behavior changes how we perceive them.

With movies marketing fictitious imagery about dinosaurs, it’s important to consider what fossils and real scientists say. Dinosaurs are not the gigantic scaley green ‘chompers’ that movie classics like “Jurassic Park” brought back to life. Factual dinosaur tell-alls show that most dinosaurs had feathers like birds while others reproduced as teens to avoid going extinct.

In nature, there is no one-size-fits-all mentality to understand growth. It varies from one species to another. For bigger dinosaurs to achieve their size, they underwent massive growth spurts since they didn’t live too long as adults. It was the trick to their survival: grow fast.

The Titanosaurs are considered the largest reptiles and probably the largest animals to ever walk the Earth. Titanosaurs were four-legged herbivores and weighed at least 90 tons — that’s about 25 grown elephants. The Titanosaurs’ size resulted in some big babies. They hatched with almost adult-like proportions.

Another dinosaur that grew fast was the Mamenchisaurus, an herbivore with a 35-foot long neck as an adult. This bizarrely giant reptile took 30 years to grow to about 70 feet. But these insane growth spurts didn’t affect the biggest dinosaurs alone. Unlike other species that grew slowly over time, the tyrannosaurus rex also underwent huge growth in its teenage years.

Dinosaur enthusiasts will always tell you that while dinosaur fossils are valuable, we can always see them if we look at the creatures in our skies. Research shows that dinosaurs live and breathe all around us, but we prefer to call them birds.

In the 1960s, paleontologists discovered the Deinonychus, a carnivorous dinosaur that roamed North America during the early Cretaceous period. A study of the species revealed that they share some stark similarities to birds. They were bipedal, which means they walked on two legs, and their main weapon was their sickle-like talons that grew to about five inches long! To maintain balance as they ran to attack prey, Deinonychus used their tail.

Fossils of the Deinonychus show that the bodies of the bird ancestors shrank over time as they adapted to changes in their environment. While it would be arrogant to imagine a Tyrannosaurus rex shrinking into a bird, it is important to appreciate that the process was millions of years in the making. So, the next time you see a pigeon or chicken, just imagine that they were once tough reptiles that ruled the world.

8 - Some Dinosaurs Were Smarter Than Others

Researchers agree that the Stegosaurus was the dumbest dinosaur – aw, poor dumb dino — while the Trodoon was the most intelligent.

The Stegosaurus was a four-legged herbivore, well-known for the upright plates on its back and spiked tail. While the Stegosaurus was gigantic at about nine meters long, studies reveal that they had a brain the size of a walnut. The brain size is inadequate for such a giant reptile, making the plates on its back logical. They needed extra protection from predatory dinosaurs since they might have had trouble “thinking outside the box.”

The Trodoon had fewer things to worry about since it was smaller with a large brain to boot. The predatory reptile had stereo vision, speed, and big eyes to spot its prey, making it a threat to smaller reptiles.

Other smart dinos include the chicken-sized compsognathus and the Deinonychus. According to “Jurassic Park,” the Deinonychus could open a doorknob. While the movie’s exaggerations hyped up the magnificent reptile, research suggests they could strategize and communicate. If you ever go back in time, pray you don’t cross paths with this smart bunch!

7 - Dinosaurs Lived On All Continents

When dinosaurs roamed the Earth, they roamed all of it. During the Triassic period, about 230 million years ago, the Earth was made up of a single continent called Pangea. Gradually, as the supercontinent broke up into smaller continents, dinosaurs found themselves moving with the newly created continents.

Over the years, evidence that dinosaurs lived all over the world has been found on all continents. From Europe to the Americas, Africa, and Asia, fossils of the beasts have been uncovered from the dirt.

6 - An Asteroid Didn’t Kill Off All The Dinosaurs

The most popular misconception about the extinction of the dinosaurs was that an asteroid landed in the Yucatan Peninsula and eradicated them in one fell swoop! As dramatic as that sounds, this one single extinction-level event was not responsible for the disappearance of all dinosaurs.

The Earth also helped kill off the dinosaurs, one species after another, over a long time. The truth is that about 66 million years ago, an asteroid entered the Earth’s atmosphere and, after landing, created true chaos. The impact of the 7.5 miles asteroid vaporized soot, started wildfires, and with soot covering the entire planet, animals stood no chance. Things were so terrible that carbonated soot engulfed the globe blocking the Sun from reaching the Earth. It was a dark event, literally.

The post-apocalyptic conditions after the asteroid have been responsible for the extinction of 76% of the Earth’s species. Plants and animals, including the dinosaurs, were part of this unfortunate group. The event is a great lesson to humanity and why we need to look for stellar beings heading our way!

Most of us picture the big and dangerous types of dinosaurs, but they were not the only ones. Dinosaur sizes range from ones as big as buildings to others that were so small you could confuse them for chickens!

The Titanosaur is generally accepted as the largest dinosaur standing on the ground at about 46 feet, allowing them to eat leaves as high as a five-story building. This evolutionary advantage is almost unbelievable. If the Titanosaur is to be exhibited, a museum might have to take the roof off to accommodate it. Others like the Sauroposeidon were equally intimidating at almost 42 feet.

On the smaller side, the Lesothosaurus is considered one of the smaller species, approximated to be the size of a chicken. For a plant-eater, the reptile was a perfect size, but it was not the smallest. Paleontologists discovered that the Oculudentavis khaungraae was even smaller, the size of a hummingbird. In the dinosaur world, size was an issue.

4 - Most Dinosaurs Were Vegetarian

Books and movies are all the rage with the Tyrannosaurus rex and velociraptors that suggest dinosaurs were always looking to attack prey. Yet, research suggests that dinosaurs might have been more peaceful than we have been led to believe. Most of them were vegetarian, which means they wouldn’t have attacked without provocation.

In the natural world, there is balance, and often enough, carnivores are small in number compared to herbivores. In the age of the dinosaurs, this rule was also true as Hadrosaurs, Ornithopods, and Sauropods roamed the planes in search of vegetation. These reptiles were more concerned with feeding and, while traveling in herds, protected themselves from scores of predators. Theropods, the flesh-eating dinosaurs, hunted the vegetarian dinosaurs as their meals, creating a balance in nature.

So, while movies use Tyrannosaurus-rex and Velociraptors as the selling image for dinosaurs, they ignore the fact that they were largely peaceful.

Reptiles are largely cold-blooded as they rely on the environment around them to heat themselves internally. Research reveals that as reptiles, dinosaurs might have been neither cold-blooded nor warm-blooded. If they were fully warm-blooded, they could have microwaved themselves from the inside out because of their humongous sizes.

Paleontologists studying the physiology of dinosaurs found that while the reptiles were believed to be cold-blooded, their growth and active lifestyles suggest otherwise. The high growth rates of dinosaurs suggest that they might have been ‘mesotherms,’ which means part cold-and-warm blooded.

The designation as mesotherms justifies the growth of the large reptiles and the hunger-driven personalities of the predators. Dinasaurs needed the energy to fuel their bodies.

2 - Dinosaurs Most Likely Had Feathers, Not Scales

You’ve probably heard that dinosaurs share many similarities with birds, and this extends to feathers. While birds are long believed to be the only creatures with feathers, it seems dinosaurs had them first. The surprising thing is that even dinosaurs that were not direct relatives to birds have been found with feathers.

In 1996, scientists unearthed the Sinosauropteryx, a theropod that had feathers. The discovery helped along in proving theories on the look and behavior of dinosaurs millions of years ago. Dinosaurs were not the green and scaly creatures we see on tv, as all evidence shows they were feathered beasts.

While the verdict is still out on whether all dinosaurs were feathered, scientists are convinced that many meat-eaters were feathered. These are the direct relatives of birds that are descendants of avian variants. If you love chicken, maybe you could have domesticated a pet Tyrannosaurus rex if you got over the “It might eat me” phase.

This list features some incredible facts about dinosaurs, and the top spot belongs to none other than the majestic Tyrannosaurus rex. The Tyrannosaurus rex gets a bad rap for its ridiculously short arms, but the carnivore had saw-like teeth that made it an apex predator.

Studies have shown that the 45-feet long beast had 10-inch long teeth that sustained a hyper-carnivorous feeding style. With a special arrangement of dentine that strengthened its teeth, the t-rex could crush bones and take at least 500 pounds in a single bite. Five hundred pounds is about the size of a fully grown Siberian tiger, which shows just how powerful the Tyrannosaurus rex was.