A rare fossil believed to be from South Australia's only known dinosaur is shedding new light on the turkey-sized creature, with the opalised toe bone resurfacing on the internet after disappearing for almost five decades.

The fossil is one of only three dinosaur bones known to have been found in South Australia, all of which are from a species called Kakuru kujani.

The fossilised bones were originally found in South Australia's outback in sediments from the early Cretaceous Period, about 110 million years ago.

A fossil expert at the South Australian Museum said the Kakuru appeared to have been a small carnivorous dinosaur.

"These are the only bones of this dinosaur known anywhere in the world," said Ben McHenry, the museum's senior collections manager for earth sciences.

The fossil will officially be unveiled at the museum later today.

"It's a toe bone, it's about five centimetres long," Mr McHenry said.

"Australia is the only place in the world where you find opalised fossils… the bones of a dinosaur have been replaced by precious opal." 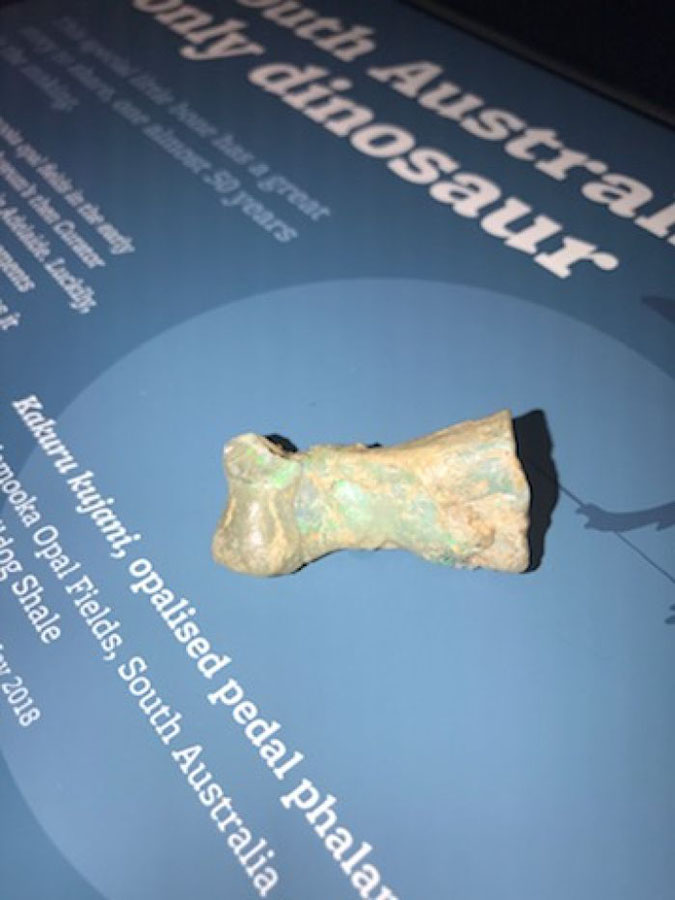 The history behind the state's only known dinosaur dates back to a discovery almost half a century ago in the centre of Adelaide.

An opalised toe bone of the dinosaur was dug up in Andamooka in the early 1970s and was spotted by Neville Pledge — the museum's then-curator of fossils.

He noticed the toe bone in 1973 in an opal shop in Hindley Street in the Adelaide CBD.

Mr Pledge is now an honorary researcher at the South Australian Museum and said he was fortunate to be able to take photos, measurements and make a few plaster casts of the toe bone — but from there, the fossil went missing.

But in an intriguing twist, the bone was spotted for sale on the internet by Coober Pedy resident Joy Kloester in April this year.

Ms Kloester immediately purchased the toe bone and offered it to the museum.

Mr McHenry said he acted quickly to acquire the rare specimen and said the find was so special because dinosaur bones were "incredibly rare" in the state.

"The reason why we don't have dinosaur bones is because when the dinosaurs were stomping around on the land, most of South Australia was under water," he said.

"The rocks which now form the Great Artesian Basin were once an inland sea.

"These are the rock formations that host the opal at Andamooka and at Coober Pedy… 110 million years ago we were actually still joined to Antarctica as part of the supercontinent Gondwana and we were right down near the South Pole."

The fossil toe bone will be on display in the South Australian Museum's opal fossil gallery.

Jurassic World 3 to Be a Celebration of the Franchise, but May Not Be Last One

UTM paleontologists search the past to learn...

A new rumor suggests the first trailer for ...

The magic of Frontier Developments’ ...

Experts from China and Greece have started a...

This cycle has been linked to periodic...

Netflix's Jurassic World Animated Series Could Be Better Than the Sequel

Tens of millions of years ago, after most...

The fossil record is filled with meat-eating...