A newly unveiled 110 million-year-old fossil, described as “the best preserved armored dinosaur ever found,” is providing researchers with invaluable information about the recently discovered species.

The ancient fossil was accidentally discovered by machine operator Shawn Funk at a mine near Fort McMurray in Alberta, Canada, in 2011.

Further investigation revealed that the extraordinary fossil was a newfound species of plant-eating ‘nodosaur.’ The beast was so remarkably well preserved because its remains ended up in a river, possibly swept up by a flood, shortly after it died.

Its carcass was then carried out to sea where it sank to the ocean floor, becoming enveloped in mud which both preserved and petrified the nodosaur’s remains, giving the fossil the appearance of a sleeping dragon. 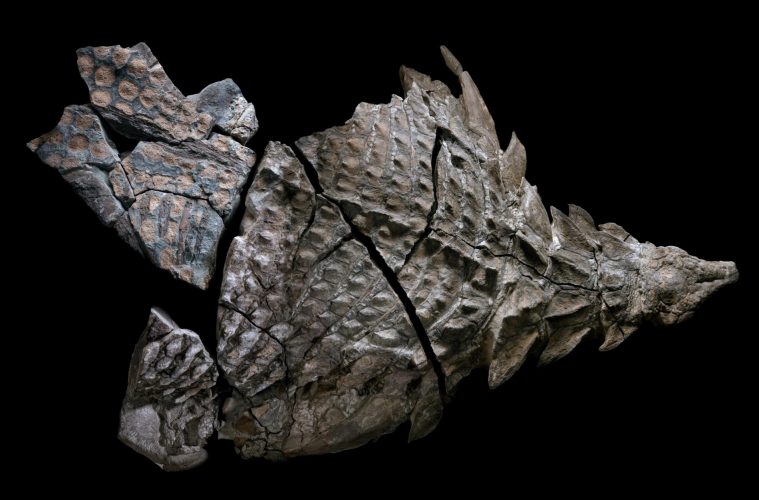 Usually just a dinosaur’s bones and teeth survive long enough to be fossilized, however, in this case because of its quick burial, intricate details of the nodosaur’s scale armor were preserved. The fossil has revealed valuable details to researchers about the makeup of the animal’s armor.

“We don’t just have a skeleton… we have a dinosaur as it would have been,” postdoctoral researcher Caleb Brown told National Geographic of the extraordinary find.

For researchers, finding the fossil was like winning the lottery. Jakob Vinther, a Paleobiologist from University of Bristol, said that it’s so well preserved it “might have been walking around a couple of weeks ago…I’ve never seen anything like this.”

The public can watch the careful restoration of the nodosaur via a lab gallery window at the Royal Tyrrell Museum in Drumheller, Alberta. The fossil now forms the centerpiece of a new exhibit focusing on Alberta’s fossil finds.

The job of preserving the fossil fell to museum technician Mark Mitchell, who worked on the nodosaur for more than 7,000 hours over five years to painstakingly expose the fossil’s skin and bone. “You almost have to fight for every millimeter,” he said.