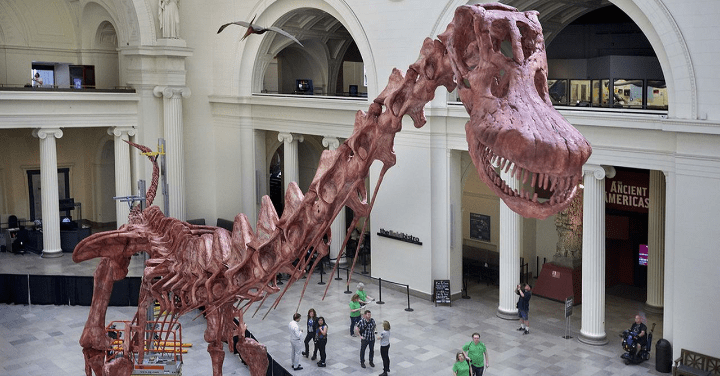 The Field Museum in Chicago received the largest dinosaur ever discovered and debuting him on June 1st.

This week, the Field Museum in Chicago unveiled a cast of the largest dinosaur ever discovered, and his name's Máximo. The 122-foot-long touchable cast takes up a third of the Museum's main Stanley Field Hall, with its head peeking over the 28-foot balcony to the second floor. The titanosaur, a recently discovered dino from Argentina, is nicknamed Máximo—Spanish for "maximum" or "most" and a nod to the dinosaur's enormous size and Argentinian homeland.  And Máximo won't be alone—as part of the museum's massive renovation to its iconic Stanley Field Hall, he'll be joined this week by a flock of life-size replicas of giant flying reptiles, as well as state-of-the-art hanging gardens. These additions will transform the hall in celebration of the museum's 125th anniversary this year.

"Our goal as an institution is to offer visitors the best possible dinosaur experiences, and we want that to start right when visitors first enter Stanley Field Hall," says Field Museum president Richard Lariviere. "The new titanosaur is huge and it looks amazing in Stanley Field Hall. It is the perfect home to display the world's largest dinosaur."

The new dinosaur is a cast made from the fossil bones of Patagotitan mayorum (pat-uh-go-tie-tan my-or-um), a giant, long-necked herbivore from Argentina that's part of a group of dinosaurs called titanosaurs. The cast is the only Patagotitan in the world that visitors are able to touch and walk under, and only the second to ever be on display. Along with the cast of the titanosaur skeleton, there are some of its real bones on display, including an 8-foot-long thighbone. Máximo's pink hue matches the color of the real fossils, turned reddish by the red clay soil where they were found.

The flock of pterosaurs (which are flying reptiles, not dinosaurs) joining Máximo will give visitors a lifelike look at the animals that shared the planet with the dinosaurs. The pterosaurs will also serve as a wayfinding tool from Stanley Field Hall up to the rest of the dinos and SUE's new home in the permanent exhibition The Griffin Halls of Evolving Planet. The largest pterosaur will have a 32-foot wingspan, the length of a school bus.

Máximo, the flying reptiles, gardens, and renovations to SUE the T. rex (who is undergoing scientific updates before their reveal in their new gallery by the museum's other dinos in early 2019) are all made possible by Citadel CEO Kenneth C. Griffin's generous gift of $16.5 million, and are just the beginning of groundbreaking changes at the museum this year. "Visiting the Field Museum has brought tremendous joy and wonder to my children and me over the years," says Griffin. "I am proud to support such an outstanding institution so that children and families can better understand and appreciate dinosaurs and their history."