Scientists Predict How Dinosaurs Like Tyrannosaurus Rex Pursued Their Prey 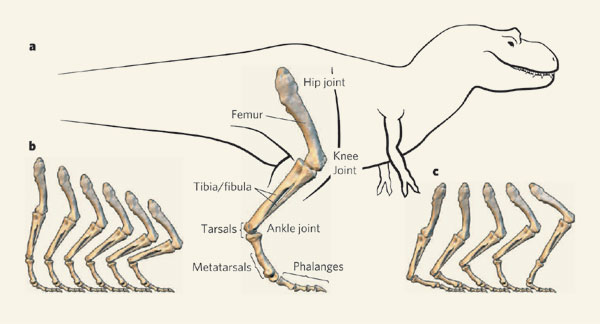 The mechanics of a dinosaur’s massive body can be hard to understand because scientists cannot watch them in motion, but birds are helping to solve the mystery that cannot be unraveled with fossils alone.

Although the dinosaur era ended with a devastating asteroid impact about 66 million years ago, birds are descendants of the prehistoric beasts. A team of researchers studied 12 species of birds of varying sizes that live on the ground and run, including the birds’ motions and how much force their feet exert upon the ground when they move.

Birds show “a highly continuous locomotor repertoire compared to humans, where discrete ‘walking’ and ‘running’ gaits are not easily distinguished,” according to the study, published in the journal PLOS One.

In other words, their change from walking to running is more of a flow, while in humans a change between the two modes is more stark.

Researchers had previously documented that flow from walking to running before, and the new study backs up that model.

The scientists say their observations are a window into how bipedal dinosaurs — the ones that stood on their hind legs — may have walked and run.

The famous Tyrannosaurus rex is one example of a bipedal dinosaur, as is the Velociraptor. The quadrupedals, or the dinosaurs that walked on four legs, included popular ones like the Triceratops and the Stegosaurus.

“A perennial question of interest for paleontologists is how extinct animals appeared and behaved when they were alive,” the authors wrote in their paper. “One way of better understanding how extinct theropods moved is to examine locomotion in extant theropods, birds, because birds retain many (homologous) anatomical similarities to their ancestors.”

The scientists collected information by video recording the birds as they ran along racetracks, according to journal publisher Public Library of Science. Plates in the ground measured the force the birds exerted with their feet.

The team crunched its data on running birds and how their locomotion changed with their speed and size to create models that might predict how the dinosaurs moved.

Those models have the potential to change how scientists interpret dinosaur footprints.

“At equivalent relative speeds, a small theropod will be moving in a decidedly different fashion to a large theropod,” according to the study. “This in turn raises concerns about the accuracy with which palaeontologists can reliably interpret fossil theropod footprints, in terms of inferring the posture and ‘gait’ of the trackmaker.”