Paleontologists estimate that the abundance of one of the best-known dinosaurs, Tyrannosaurus rex, at any one time was about 20,000 individuals, that the species persisted for 127,000 generations, and that the total number of Tyrannosaurus rex that ever lived was 2.5 billion individuals.

Much can be learned from the fossil record about extinct species like the dinosaurs.

However, due to the record’s fragmented nature, understanding ecological variables such as population density and abundance remains challenging.

In living species, one way to understand more about these variables is by using the established relationship between population density and body mass, or Damuth’s Law, which states that the average population density of a species decreases with body size at a predictable rate.

Using this law and the large body of paleontological data for Tyrannosaurus rex, Professor Charles Marshall from the University of California Museum of Paleontology and his colleagues estimated population-level traits and the rate of fossil preservation for the species.

The researchers mined the scientific literature for data they used to estimate that the likely age at sexual maturity of a Tyrannosaurus rex was 15.5 years; its maximum lifespan was probably into its late 20s; and its average body mass as an adult was about 5.2 tons.

They also used data on how quickly Tyrannosaurus rex grew over their life span: they had a growth spurt around sexual maturity and could grow to weigh about 7 tons.

From these estimates, they calculated that each generation lasted about 19 years, and that the average population density was about one dinosaur for every 100 km2.

Then, estimating that the total geographic range of Tyrannosaurus rex was about 2.3 million km2, and that the species survived for roughly 2.5 million years, they calculated a standing population size of 20,000.

Over a total of about 127,000 generations that the species lived, that translates to about 2.5 billion individuals overall.

What’s more, the scientists estimate that the population density of the species equated to 3,800 Tyrannosaurus rex in an area the size of California. 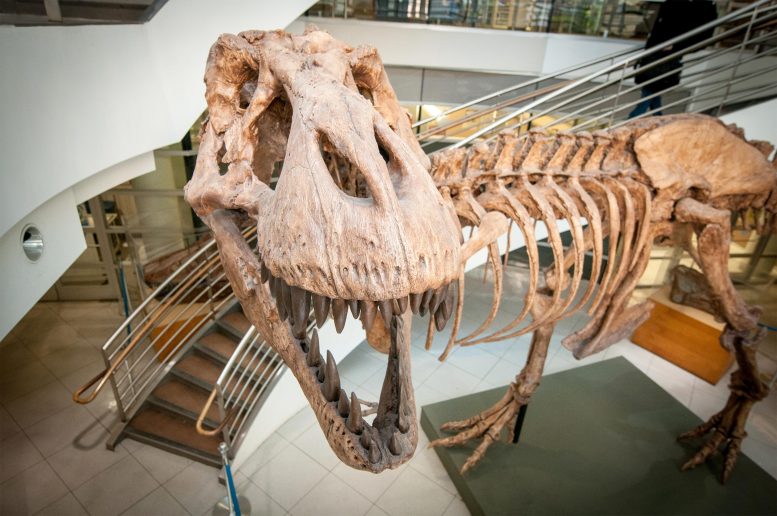 The results also allowed them to determine that only about 1 in 80 million Tyrannosaurus rex survived the eons as fossilized remains.

“Of all the post-juvenile adults that ever lived, this means we have about one in 80 million of them.”

“If we restrict our analysis of the fossil recovery rate to where Tyrannosaurus rex fossils are most common, a portion of the famous Hell Creek Formation in Montana, we estimate we have recovered about one in 16,000 of the Tyrannosaurus rexes that lived in that region over that time interval that the rocks were deposited.”

“We were surprised by this number; this fossil record has a much higher representation of the living than I first guessed.”

“It could be as good as one in a 1,000, if hardly any lived there, or it could be as low as one in a quarter million, given the uncertainties in the estimated population densities of the beast.”

The team’s results were published today in the journal Science.

Is The Neo-Jurassic Age The Future Of The Jurassic Park / World Franchise?

With the recent release of season 2 of ...

Scientists believe they have settled a...

Scientists have discovered the fossil skull...

Understanding the Relationship Between Dinosaurs and Birds

Modern birds are descended from a group of...

The fossils from the...