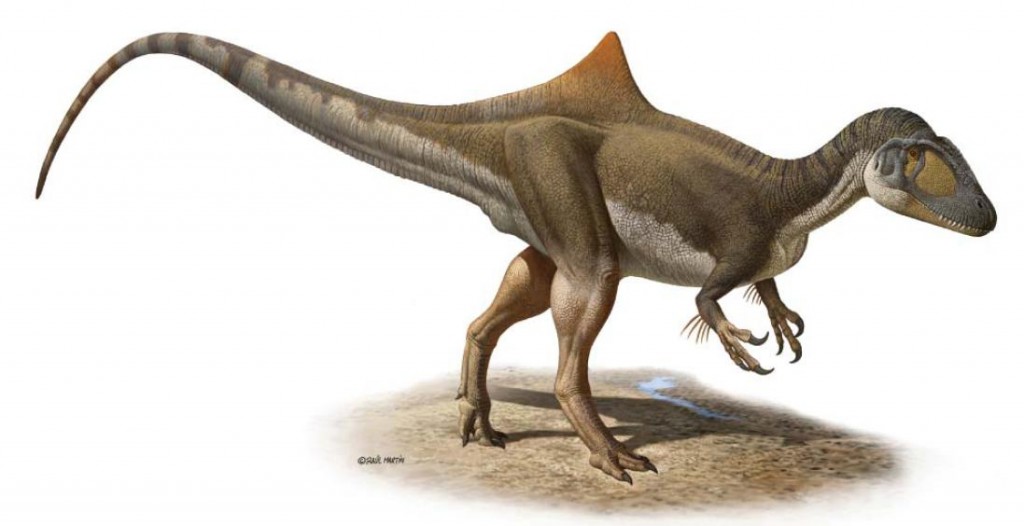 To date, paleontologists have named nearly a thousand dinosaurs, but only a handful stand out from the rest—not for size, or for viciousness, but for sheer weirdness. A plant-eating ornithopod covered with feathers? A tyrannosaur with the snout of a crocodile? A horned, frilled ceratopsian sporting a hairdo worthy of a 1950's TV evangelist? 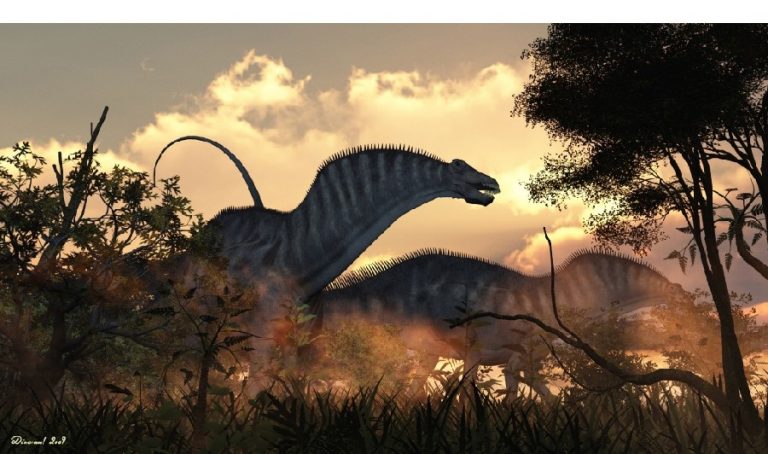 As sauropods go, Amargasaurus was a true runt: this early Cretaceous dinosaur measured a scant 30 feet long from head to tail and weighed only two or three tons. What really set it apart, though, were the prickly spines lining its neck, which appear to have evolved as a sexually selected characteristic (that is, males with more prominent spines were more attractive to females during mating season).

It’s also possible that the spines of Amargasaurus supported a thin flap of skin or fatty flesh, similar to the back sail of the slightly later meat-eating dinosaur Spinosaurus. 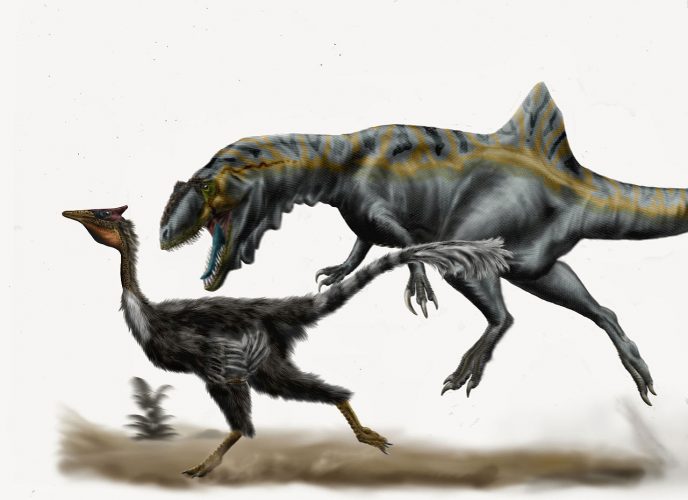 Concavenator is a truly weird dinosaur for two reasons, the first obvious at a glance, the second requiring more careful inspection. First, this meat-eater was equipped with a strange, triangular hump in the center of its back, which may have supported an ornate sail of skin and bone, or may just have been, well, a strange, triangular hump. Second, Concavenator’s forearms were decorated with “quill knobs,” which likely sprouted colorful feathers during mating season; otherwise, this early Cretaceous theropod was presumably as lizard-skinned as an Allosaurus.

The Greek root “kosmo” in Kosmoceratops doesn’t mean “cosmic”–rather, it translates as “ornate”–but “cosmic” will do just fine when describing a dinosaur that sported such a psychedelic array of frills, flaps and horns. The secret to Kosmoceratops’ bizarre appearance is that this ceratopsian dinosaur lived on a relatively isolated island of late Cretaceous North America, Laramidia, and was thus free to evolve in its, er, cosmic direction.

As with other such adaptations in the animal kingdom, the elaborate ‘do of Kosmoceratops males was clearly intended to win over the opposite sex during mating season.

For decades before the discovery of Kulindadromeus, paleontologists abided by a hard-and-fast rule: the only dinosaurs to sport feathers were the small, two-legged, meat-eating theropods of the Jurassic and Cretaceous periods. The trouble with Kulindadromeus, announced to the world in 2014, is that this feathered dinosaur wasn’t a theropod but an ornithopod–the small, two-legged, plant-eating ornithischians that were previously assumed to possess scaly, lizard-like skin.

What’s more, if Kulindadromeus had feathers, it may also have been equipped with a warm-blooded metabolism–which would require rewriting a few dinosaur books.

You may, perhaps, have heard of Therizinosaurus, a bizarre, long-clawed, pot-bellied dinosaur of central Asia that looked like a cross between Big Bird and Cousin Itt from The Addams Family. For the purposes of this list, however, we’ve decided to feature Therizinosaurus’ cousin Nothronychus, the first dinosaur of its kind ever to be discovered in North America, after paleontologists had concluded that therizinosaurs were a strictly Asian phenomenon.

Like its more famous relative, Nothronychus appears to have pursued a completely herbivorous diet–a rather strange evolutionary choice for a confirmed theropod (the same family that includes tyrannosaurs and raptors).

In retrospect, it should come as no surprise that the dinosaurs of the Mesozoic Era anticipated the ecological niches of the megafauna mammals that lived millions of years later, during the Cenozoic Era. But paleontologists were still unprepared for the discovery of Oryctodromeus, a six-foot-long, 50-pound ornithopod that inhabited burrows in the forest floor, like an oversized badger or armadillo.

Even more weirdly, given its lack of specialized claws, Oryctodromeus must have excavated its burrows using its long, pointy snout–which would surely have been a comical sight for any theropods in the immediate vicinity. (Why did Oryctodromeus burrow in the first place? To avoid the attention of the larger predators of its middle Cretaceous ecosystem.)

Better known as “Pinocchio Rex,” Qianzhousaurus was a strange duck indeed–a tyrannosaur equipped with a long, pointed, crocodile-like snout reminiscent of an entirely different branch of the theropod family, the spinosaurs (typified by Spinosaurus). The trouble is, we know the reason dinosaurs like Spinosaurus and Baryonyx had elongated snouts was that they lived by (or in) rivers and hunted fish.

The evolutionary motivation for Qianzhousaurus’ schnozz is a bit more uncertain, since this late Cretaceous dinosaur appears to have subsisted exclusively on terrestrial prey. The most likely explanation is, you guessed it, sexual selection; males with bigger snouts were more attractive to females during mating season. 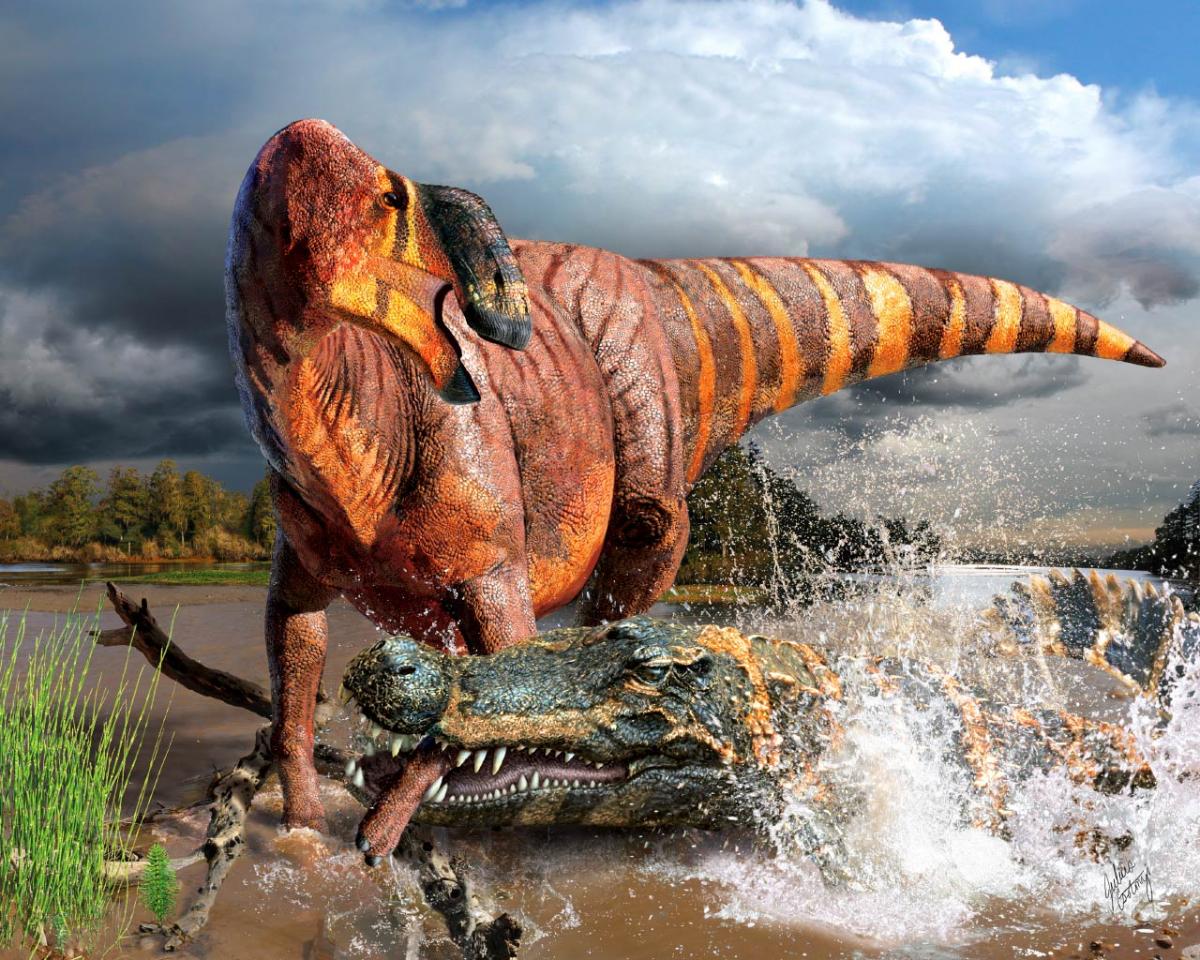 Wait, we’re not done with big-nosed dinosaurs yet! Rhinorex, the “nose king,” comes by its name honestly: this hadrosaur was equipped with a huge, fleshy, protuberant schnozz, which it probably used to signal other members of the herd with loud blasts and blares (and yes, of course, you know the drill, to attract members of the opposite sex during mating season). This duck-billed dinosaur of late Cretaceous North America was closely related to the better-attested Gryposaurus, which possessed an equally disproportionate honker, but didn’t have the luck to be named by a paleontologist with a sense of humor.

Its name alone–which can be roughly translated from the Greek as “horned demon from the river of hell”–is a good indication of Stygimoloch‘s weirdness quotient. This dinosaur possessed the biggest, boniest noggin of any identified pachycephalosaur (“thick-headed lizard”); presumably the males head-butted each other, and occasionally rendered each other unconscious, for the right to mate with females.

Unfortunately, it may also turn out that the “type specimen” of Stygimoloch was merely an advanced growth stage of the better-known bone-headed dinosaur Pachycephalosarus, in which case the latter genus would take pride of place on this list.

Would you be terrified of a rampaging Tyrannosaurus rex if it happened to be covered with bright orange feathers? That’s the question you have to ask when discussing Yutyrannus, a recently discovered tyrannosaur of early Cretaceous Asia that supplemented its two-ton bulk with a feathery covering that wouldn’t have looked out of place on Big Bird. More weirdly, the existence of Yutyrannus raises the possibility that all tyrannosaurs were covered with feathers at some stage of their life cycles–even the big, fierce T. rex.