MANY LARGE words that are used every day are made up of small, pieces of words called roots or combining forms. The roots come from other languages like Greek and Latin and, when combined, form common English words. For instance, using the four roots:

scope, from Greek meaning to look, watch or see

several common words can be made such as:

telescope, allows far away objects to be seen

The names of dinosaurs are formed the same way. Although they often seem to be merely long strings of random letters designed by scientists specifically to be difficult to pronounce, the names of the animals are combinations of word roots that always describe something about the animal. For example, combining the following three roots:

-ops, from Greek meaning face gives the name for

Triceratops, a dinosaur with a three-horned face.

Another difficult sounding dinosaur name is Pachycephalosaurus. Broken down into its combining forms it means:

-saurus, from the Greek meaning lizard

This is not a comment on the animal's intelligence. It is a description of an animal with a projection on the upper part of the skull making the head look thicker than normal.

Dinosaur names can also describe where the animal was first discovered:

Albertosaurus was discovered in the province of Alberta, Canada

Bactrosaurus was discovered in Bactria, Mongolia

Other dinosaur names honor the person who was instrumental in the discovery:

Lambeosaurus was named for Lawrence Lambe, a paleontologist with the Geological Survey of Canada.

Diplodocus carnegii was named for Andrew Carnegie who financed the expedition for its discovery. 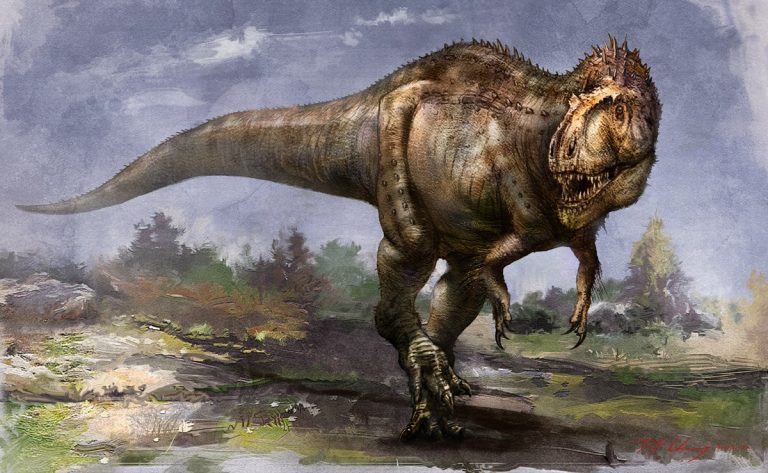 Sinraptor is a genus of theropod dinosaur from the Late Jurassic. The name Sinraptor comes from the Latin prefix “Sino”, meaning Chinese, and “Raptor” meaning thief. The specific name dongi honours Dong Zhiming. Despite its name, Sinraptor is not related to dromaeosaurids (often nicknamed “raptors”) like Velociraptor.

Gigantoraptor is a genus of giant oviraptorosaurian theropod dinosaur.

It was clear to Xu et al. that Gigantoraptor belonged to the Oviraptorosauria, a group named after Oviraptor, but compared to other known members, Gigantoraptor was much larger, approximately three times as long and 35 times more massive than the heaviest earlier discovered oviraptorosaurid Citipati. Xu et al. estimated the length at 8 metres (26 ft) and the weight at 1400 kilogrammes. In 2010, Gregory S. Paul even gave an estimate of two tonnes (2.2 tons).

Afrovenator is a genus of megalosaurid theropod dinosaur from the middle Jurassic Period of northern Africa. It was a bipedal predator, with three claws on each hand.

Austroraptor is a genus of dromaeosaurid dinosaur that lived about 70 million years ago during the Cretaceous Period in what is now modern Argentina. Austroraptor was a medium sized, moderately-built, ground-dwelling, bipedal carnivore, that could grow up to 5 m (16.4 ft) long. Its length makes Austroraptor one of the largest dromaeosaurids known, with only Achillobator, Dakotaraptor, and Utahraptor approaching or surpassing it in length. It is the largest dromaeosaur to be discovered in the Southern Hemisphere. Particularly notable about the taxon were its relatively short forearms, much shorter in proportion when compared to the majority of the members of its group.

Skorpiovenator is a genus of abelisaurid theropod dinosaur from the late Cretaceous period of Argentina.

Raptorex is a dubiousgenus of tyrannosaurid dinosaur. Its fossil remains consist of a single juvenile specimen probably uncovered in Mongolia, or possibly northeastern China. The type species is R. kriegsteini, described in 2009 by Sereno and colleagues. The genus name is derived from Latinraptor, “robber”, and rex, “king”. The specific name honours Roman Kriegstein, a survivor of the Holocaust, whose son Henry Kriegstein donated the specimen to the University of Chicago for scientific study.

Sauroposeidon (meaning “earthquake god lizard”, after the Greek god Poseidon) is a genus of sauropod dinosaur known from several incomplete specimens including a bone bed and fossilized track ways that have been found in the American states of Oklahoma, Wyoming, and Texas. The fossils were found in rocks dating from near the end of the Early Cretaceous (Aptian–early Albian), a time when sauropod diversity in North America had greatly diminished. It was the last known North American sauropod prior to an absence of the group on the continent of roughly 40 million years that ended with the appearance of Alamosaurus during the Maastrichtian.

Lythronax is a genus of tyrannosaurid theropod dinosaur that lived around 80.6 to 79.9 million years ago in what is now southern Utah, USA. The generic name is derived from the Greek words lythron meaning “gore” and anax meaning “king”. Lythronax was a large sized, moderately-built, ground-dwelling, bipedal carnivore that could grow up to an estimated 8 m (26.2 ft) in length and weighed 2.5 tonnes (5,500 lb).

L. argestes is the oldest known tyrannosaurid, based on its stratigraphic position. It is known from a specimen thought to be from a single adult that consists of a mostly complete skull, both pubic bones, a tibia, fibula, and metatarsal II and IV from the left hindlimb, as well as an assortment of other bones. Its skull anatomy indicates that, like Tyrannosaurus, Lythronax had both eyes facing the front, giving it depth perception.

Teratophoneus is a genus of carnivorous tyrannosaurid theropod dinosaur which lived during the late Cretaceous period (late Campanian age, about 77 to 76 million years ago) in what is now Utah, United States. It is known from an incomplete skull and postcranial skeleton recovered from the Kaiparowits Formation. The Teratophoneus or “monstrous murderer” (Greek: teras, “monster” and phoneus, “murderer”) was specifically named T. curriei in honor of Philip J. Currie.

Colepiocephale is a genus of pachycephalosaurid dinosaur from Late Cretaceous (middle Campanian stage) deposits of Alberta, Canada. It was collected from the Foremost Formation (middle Campanian, 80-77.5 ma). The type species, C. lambei, was originally described by Sternberg (in 1945 as Stegoceras lambei), and later renamed by Sullivan in 2003. C. lambeiis a domed pachycephalosaur characterized principally by the lack of a lateral and posteriosquamosal shelf, a steeply down-turned parietal, and the presence of two incipient nodes tucked under the posterior margin of the parietosquamosal border.