What Was The Biggest Dinosaur? How Scientists Determine Giant Prehistoric Record-Breakers | Paleontology World

What Was The Biggest Dinosaur? How Scientists Determine Giant Prehistoric Record-Breakers

Dinosaurs were among our planet’s most diverse land animals. They ranged from the chicken-sized Microraptor zhaoianus – at 39 cm (15.3 in) in length, the Smallest dinosaur – to the titanic sauropods (aka titanosaurs) that could weigh the same as an entire herd of African elephants, the Largest land animals today…

Ever since these prehistoric beasts came to light – the First scientific description of a dinosaur dates to 1824 – palaeontologists have faced the very difficult challenge of estimating their size. It’s fine when the remains are more or less complete: the Most complete Tyrannosaurus rex, incidentally, is “Sue”, who was unearthed in 1990 in South Dakota, USA, and was around 90% intact.

But “Sue” is a rare exception. The vast majority of dinosaurs – particularly larger specimens – have to be identified and filled out from minimal fragments. Over 2,000 species of non-avian dinosaur have so far been recognized and named, but many are known from just a single bone. In cases such as these, the dinosaurs’ proportions can only be calculated by comparing their bones with those from the same family with more extensive skeletal remains.

Although advanced 3D-modelling software is making this job easier than it used to be, this process often still relies upon past finds and educated guesswork. As you can imagine, this results in a lot of debate when it comes to definitively declaring superlative dinos.

Like most records that deal with size, you first have to establish your parameters for “bigness”. Length, height and weight are all key characteristics that need to be taken into account.

Argentinosaurus – long-heralded the Heaviest dinosaur – is known from only a small number of bones found in Argentina in the early 1990s. One vertebra (neck bone) was 1.59 m (5 ft 3 in) long, indicative of a giant sauropod, so to estimate its full size, palaeontologists compared it with vertebrae in the skeletons of more complete members of the sauropod clade, namely Saltasaurus and Rapetosaurus.

Argentinosaurus isn't without its rivals for the heavyweight title. A fellow titanosaur, since named Patagotitan mayorum – only found in 2012, also in Argentina – could have tipped the scales at 69 tonnes (152,118 lb). So at the lower end of the range for Argentinosaurus, that would make Patagotitan the biggest animal ever to walk the Earth. Others argue, however, that a more conserative body mass range for Patagotitan is 50–55 tonnes (110,231–121,254 lb).

The debate, like the footsteps of these prehistoric giants, will inevitably rumble on for a long time…

The most likely Tallest dinosaur, meanwhile, is another sauropod – the lofty Sauroposeidon proteles (below), which lived in the Early Cretaceous period. Owing to an extraordinarily elongated neck, it could have towered as tall as 18 m (59 ft) off the ground – about the same as four double-decker buses in a stack!

It has to be acknowledged that this figure is based on a very small sample of bones and extrapolated from the more extensive remains of a similar prehistoric giant, Giraffatitan brancai – which itself was yet another former contender for the title of “largest dinosaur”.

As you could probably guess by now, the Longest dinosaur was yet another sauropod. Which species, again, is a matter of conjecture. Amphicoelias has to be a prime contender, though, given its estimated head-to-tail length of up to 60 m (197 ft) – more than twice that of a full-grown blue whale.

The ever-popular Diplodocus also deserves a mention here just for its prodigious tail – the 14-m (46-ft) appendage is the Longest tail of any animal that has ever lived.

Estimates based on limited remains aren’t only a headache for determining the overall biggest dinosaurs, either. Mongolia’s Therizinosaurus, for instance, was found with claws measuring up to 91 cm (3 ft) along their outer edge. Estimates of its total body size using only its claw dimensions would suggest an enormous creature. However, partial skeletal remains revealed that its claws were disproportionately long – indeed, the Longest dinosaur claws (see artist’s impression below). 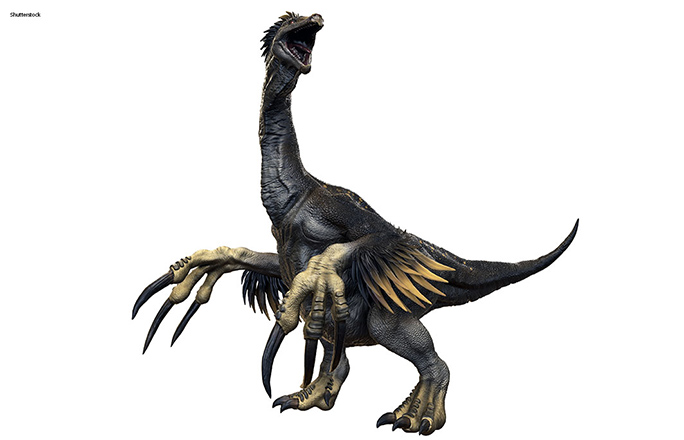 It's worth mentioning that sauropods shared the planet with many other giants that weren't dinosaurs. For instance, the oceans were ruled over by massive marine reptiles, like Mosasaurus – the Largest lizard ever, reaching up to 18 m (59 ft) long.

While the king of the flying reptiles was Quetzalcoatlus (below). These supersized pterosaurs were the Largest flying creatures ever, standing as tall as a giraffe on the ground and spanning as wide as an F-16 fighter jet with wings outstretched!

So: which was the largest dinosaur of them all? The answer is probably not as simple as you’d like it to be. What we can say, without doubt, is that the mighty sauropods stood taller, stretched longer and outweighed all other dinosaurs, and indeed any other terrestrial animal ever to walk our planet since. Any more specific than that and you have to be prepared to enter a prehistoric minefield of best estimates…

Until time travel becomes possible (or at least until some lucky paleontologist unearths a much more complete skeleton), we'll have to reconcile ourselves to the fact that we can’t be 100% certain.

Budding dino hunters: be sure to check out Guinness World Records: Wild Things, which has a special chapter dedicated to record-breaking dinosaurs, plus an interview with world-famous palaeontologist Phil Currie!